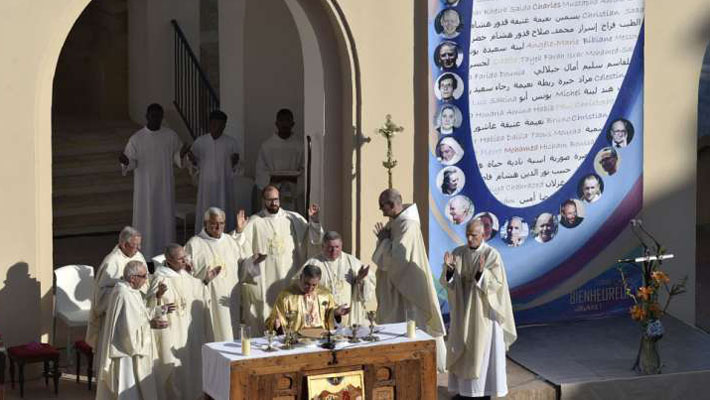 ORAN, DECEMBER 11, 2018 (CISA)-Bishop Pierre Claverie and his 18 companions, who were martyred in Algeria between 1994 and 1996, were beatified Saturday during a Mass in Oran.

The beatification Mass held on December 8, at the Shrine of Our Lady of the Holy Cross was celebrated by Cardinal Giovanni Angelo Becciu, prefect of the Congregation for the Causes of Saints and attended by thousands of faithful.

Blessed Claverie a French Algerian, and Bishop of Oran from 1981 and his companions were killed during the Algerian Civil War by Islamists in August 1, 1996.

Archbishop Paul Desfarges of Algiers noted the “thousands of victims of the Algerian civil war,” calling them anonymous heroes.

“We did not want a beatification between Christians, because these brothers and sisters died among tens and tens of thousands of Algerian Muslims,” he stated.

In his November pastoral letter, Bishop Desfarges called the beatification, “a grace for our Church,” urging the local Church, “to love as they did in the freedom that the Holy Spirit gives.”

He said the martyrs, “go before us on the path of witness that our Church is called to give in this land of Algeria, which from the first century has been watered with the blood of the martyrs.”

Archbishop Desfarges said that the martyrs’ lives “were given to God and to the people to whom love had united them.” He encouraged the faithful to pray to them “asking for the grace of fidelity for our Church in its mission.”

“The witness of the Catholic Church is not a witness against another’s religion, but a witness that the love of Christ poured out in our hearts calls us to live with love for everyone, without distinction, even enemies,” he concluded.