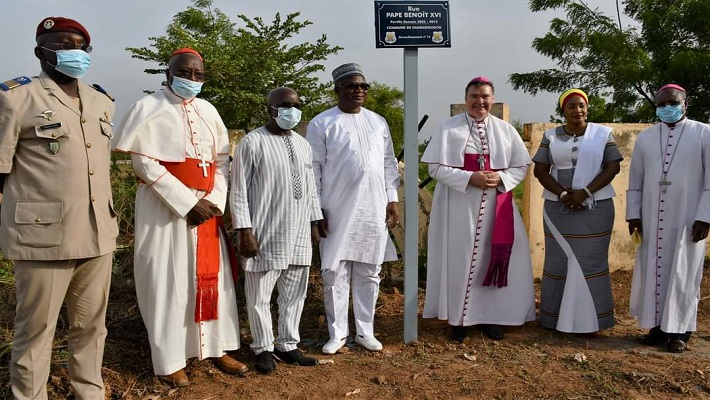 OUAGADOUGOU, JUNE 18, 2021 (CISA)-The apostolic nuncio to Burkina Faso and Niger, Archbishop Michael Francis Crotty has acknowledged the mayor and the municipality of Ouagadougou for honoring Pope Emeritus Benedict XVI with a street.

“Having a diplomatic mission is both a declaration and a commitment to deepen and strengthen bilateral relations, and there is no better way to do this than to be physically present,” said Archbishop Crotty who took the opportunity to express his joy at representing the Pope in this country.

“Indeed, the greatest joy for me to be the representative of Pope Francis is to make him present wherever I go. A presence made possible by Pope Benedict XVI who established this diplomatic mission of the Holy See in Burkina Faso and Niger here in Ouagadougou,” the nuncio said on June 11.

He also paid homage to his predecessors to the nunciature of Burkina Faso and Niger, but also to the government which made available to the Holy See the land on which the nunciature is built.

According to archbishop Crotty the nunciature “is a truly lasting legacy which has required the efforts of many people, and I would also like to thank the architect, the builders and all those who participated in the construction of this magnificent apostolic nunciature.”