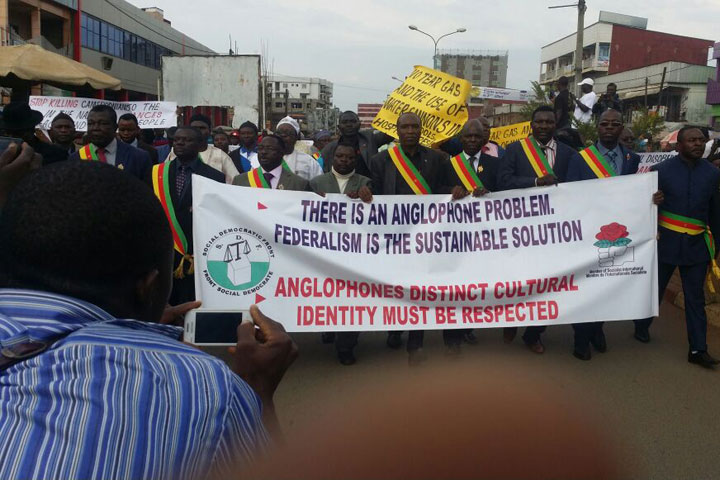 In a statement dated October 4, Bishop George Nkuo of the Catholic Diocese of Kumbo, Bishop Cornelius Fontem Esua of Buea, Bishop Andrew Nkea of Mamfe and Bishop Agapitus Nfon of Kumba called on police to exercise restraint when dealing with peaceful protesters.

“We condemn in very strong unequivocal terms the violence perpetuated by some groups of young people on the one hand and the acts of brutality, torture, inhuman and unjustified treatment meted out to some youths by the forces of law and order from the period of September 29 to October 4 in Anglophone Cameroon,” the bishops said.

The bishops, in the statement, regretted government’s reluctance to heed to their appeal for dialogue and demilitarise the regions.

They accused the government of further provoking the crisis through a so-called ‘Peace March’, and the constant denial of an existing Anglophone problem by government spokesman, Issa Tchiroma Bakary.

“The very fact that the Presidents of the Senate and of the National Assembly organised a rally at the Reunification Monument in Yaoundé on the same 1st October 2017 under the pretext of celebrating National Unity, when the military was intimidating, torturing, arresting and killing people in the North West and South West Regions, can be considered a mockery of the people of the North West and South West Regions, who were literally under siege and brutality for daring to air the same concerns,” the bishops said.

In the letter, the Bishops demanded to meet with the Head of State to explain to him the situation on the ground in the two regions as they saw and lived it and to present to him a Memorandum, which presents the historical background of the Anglophone Problem.

The regions which have long complained of marginalization on October 1 intended to declare its freedom under the name, Ambazonia republic.

According to the Central Africa Human Rights Defenders Network (REDHAC) at least 100 demonstrators have been killed by police between September 29 to October 4.