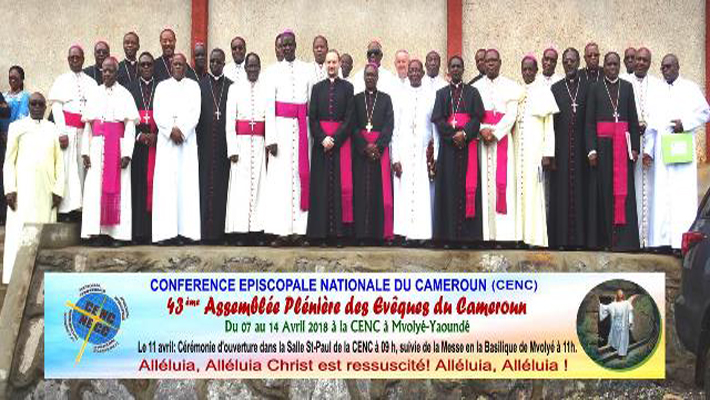 DOUALA SEPTEMBER 4, 2018(CISA)– The National Episcopal Conference of Cameroon (CENC) is hopeful that the oncoming presidential elections scheduled for October 7, will be an opportunity for all Cameroonians to “express themselves freely” by choosing the candidate able to provide just and sustainable solutions to their expectations.

“According to the teachings of the church, the people should be at liberty to exercise their sovereignty by freely, peacefully and responsibly choosing their leaders,” the bishops said in their pastoral letter released on August 24.

The bishops advised that citizens should not vote based on ethnic, linguistic, religious or cultural grounds.

Addressing presidential hopefuls, the clerics insisted on the preservation of Cameroon’s territorial integrity and its indivisibility, the aim being to live in peace with all citizens contributing to the development of the country.

For the prelates, good governance is the only way to avoid bankruptcy in Cameroon, which is why in their opinion leaders must prioritize a better distribution of resources, so that all citizens can enjoy the national heritage.

These elections fall at a particularly tense moment with many areas of experiencing instability across the country.

They will be held against the backdrop of a socio-political tensions marked by a secessionist conflict in Cameroon’s English-speaking regions of the North-West and South-West, who have witnessed many deaths and there is no immediate end to the hostilities in sight since the beginning of the Anglophone crisis in 2016.

The Nigerian border region in the far northeast is in a state of extreme volatility with deadly attacks carried out by Boko Haram since 2014 further adding to the tensions.

On top of these internal issues, are conflicts in Central Africa that have pushed more than 150,000 people over the border to seek refuge in Eastern Cameroon

The Bishops have expressed concern that these crises will have a negative effect on the upcoming presidential elections.

They state that free and transparent elections are the only way to “guarantee peace, stability and justice.”

They call on Cameroonians to choose candidates capable of dealing with the country’s social, economic and political issues and tackling inequality, corruption, unemployment and Boko Haram.

Nine candidates have expressed an interest in October’s presidential poll including incumbent Paul Biya in power for thirty-five years.

The bishops said their position on the election would read out in church on a later date as they called for Cameroonians to remain calm and show a sense of responsibility.