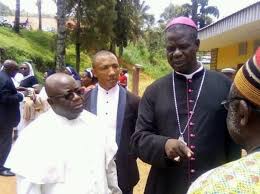 YAOUNDE, May 15, 2018 (CISA) –“Projectiles were shot at the Archdiocese of Douala headquarters, breaking its windows,” Dieudonne Bayemeg, the local Vicar General said in a statement dated May 7.

According to the Actualité du Cameroun news agency, the attack was widely believed to be linked to Archbishop Samuel  Kleda’s demands for government dialogue with separatist group and his calls for President Paul Biya not to seek a re-election.

In his statement, Bayemeg stated that the bullets hit the room of Alan Nibile the archdiocesan finance officer who escaped by throwing himself on the floor.

“There were no human injuries, and the police arrived immediately, accompanied by the archbishop, cathedral rector and household guards,” he added.

It added that inquiries were continuing and said Catholics in the central African state had been asked to “pray and remain calm.”

Since 2016, army units have also been deployed against separatists in Cameroon’s English-speaking Southwest and Northwest regions. The separatists have declared an independent state, “Ambazonia.”

In a December 5 interview with Cameroon’s La Nouvelle Expression magazine, Kleda urged Biya, in power since 1982, not to run for a fifth term in October elections and accused the president’s backers of “seeking to protect their personal interests and retain their privileges.”

In a January 1, Douala cathedral homily, he said society was being “paralyzed and destroyed by corruption at all levels,” which had “plunged the country into moral and spiritual crisis.”