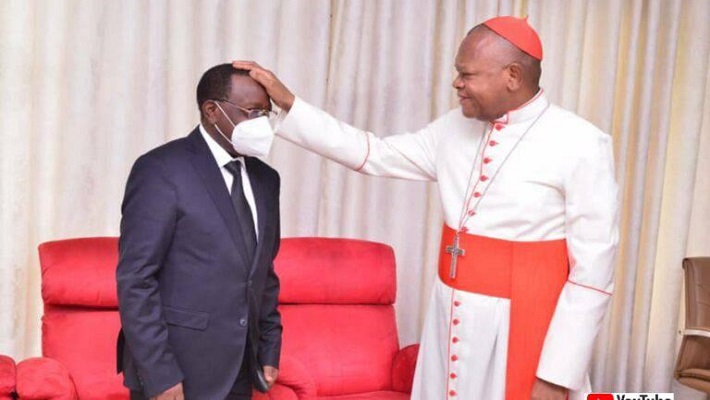 KINSHASA, MARCH 26, 2021 (CISA)-The Archbishop of Kinshasa Fridolin Cardinal Ambongo on March 22 received in audience Modeste Bahati Lukwebo, the newly elected Speaker of Senate, in what he described as a visit to seek blessings for the “high office” entrusted to him.

During the visit he expressed his attachment to the Christian faith and his gratitude to the Catholic Church, further seeking blessings from Cardinal Ambongo as he began his new duty.

“At the level of the Catholic Church, we have a mission, that of freeing the Congolese people from poverty and breaking the paradox that exists between the fact that we are potentially wealthy but we must transform all this into wealth so that the people can find happiness,” he added.

According to Cardinal Ambongo, the Church has a duty to spiritually accompany the faithful Catholics who have official responsibilities in the country.

“In very difficult times, we have received the support and accompaniment and even the defense of his eminence Cardinal Fridolin Ambongo,” he Senate Speaker Lukwebo said. “This is why today, I felt that I should also come to express to him the thanks and recognition of all the members and executives of AFDC-A.”

The Alliance of Democratic Forces of Congo (AFDC-A) led by Modeste Bahati Lukwebo formed an alliance with President Félix Tshisekedi to bring together the actors of the country likely to help him to govern better.

Lukwebo was thereafter elected speaker of the senate on March 2 after the resignation of Alexis Thambwe Mwamba.