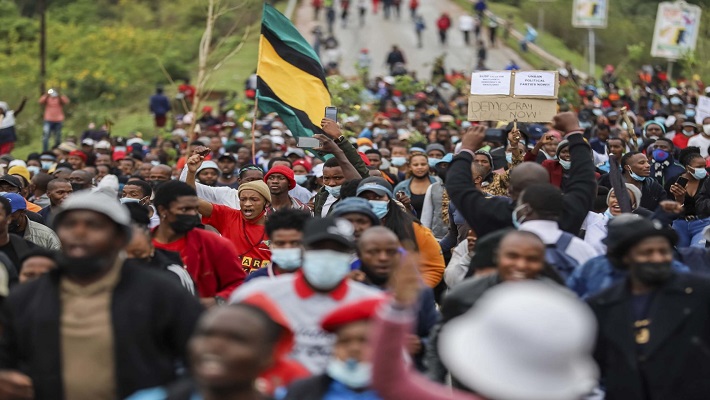 MANZINI, NOVEMBER 25, 2022 (CISA)- “Are we planning to build our future on fear and more violence? Whatever we sow is what we plan to harvest later. As fear and violence are blamed on the government, are we planning to replace them with someone else’s fear and violence?” laments Bishop José Luis Ponce de León of the Catholic Diocese of Manzini while reflecting on the changing face of the Kingdom of Eswatini.

Bishop José Luis explains in his October 19 pastoral letter that “In eSwatini, it is becoming more and more clear that our choice is death… Killings seem to have become part of our ordinary lives.”

“It is clear we no longer see in each other the God in whose image we have been created…We have rejected him as Father as we no longer see each other as brothers and sisters but have chosen the “blame game” labelling others as adversaries, terrorists, oppressors, enemies…,” he decries.

The Country Is Changing

The last month has seen an increase in violence (it has always been present at lower levels). It is a new reality for this country which always prided herself in being presented as a peaceful one. Interestingly, the population seems to have accepted that violence has now become part of our ordinary life. As I said in my statement (19.10.2022), it is very possible that violence will then increase and we will all keep adapting to it.

On Thursday, November 10, violence hit parts of Manzini. As I was leaving town for Mbabane I could see the smoke coming from the area where the Police post at the Satellite Bus Rank and other shops had been set alight. Coming back to Manzini the army had been deployed to deal with the violence. Seeing the army and not the police was the first thing that surprised me. The second one was to see them with their faces covered, an indication of their fear to be identified and later being killed or having their homes set alight.

Our relationships are also being affected. As there was no public transport in Manzini on that day, people looked for Good Samaritans who would give them a lift. Someone decided it should not be so and people being helped were forced to get off the vehicles and continue walking, while others were stopped from helping anyone. That is also violence where some decide for the rest.

Fear seems to be another element that has become part of our daily lives.

After last year’s events, I recall Catholics I knew well letting me know about the presence of members of the army “visiting” homes at night. Nothing had been said in the media about that. It was supposed to be a curfew where all of us should stay home.

Not long ago, on my way home after supper at a priest’s house, I found a roadblock by members of the army. They were heavily armed. I was not aware of roadblocks taking place by the army at night. We were able to joke as they wanted to know why I was on the road at night. No curfew had been announced but it seems we have to justify why we travel in the evening.

A new type of fear has become part of our lives. It comes from the Swaziland Solidarity Forces (SSF). They attribute themselves the arson attacks and killings. They threaten to kill or set alight the properties of those who do not do as they are told. Not sure if anyone knows who they are and who is financing them. These questions – important as they are – are hardly asked.

In his October pastoral letter, Bishop José Luis warns the people that “a society that accepts this level of violence is condemned to experience even higher levels of it which can only generate more death and suffering,” while at the same time urging the government against “ignoring the anger of many people-particularly our youth- as they see no answers to their frustration and no spaces to voice them.”

His thoughts on dialogue as the solution to the prolonged conflict in eSwatini is also shared by President Hage Gottfried Geingob of Namibia and Chairperson of the SADC Organ on Politics, Defence and Security Cooperation, who on November 18 met with King Mswati III to reiterate the commitment of SADC in seeking a lasting peace in the Southern African kingdom.

“You do not make peace with friends, you make peace with your enemies, and solutions must be found in the kingdom to whatever challenges there may be. Solutions will not come from outside but from Eswatini,” President Geingob is reported to have said after the meeting.

Read Part 3 of the reflections of Bishop José Luis as he discusses the role of the media in fueling the conflict in the country and how it can redeem itself as a channel of reconciliation in the nation in our subsequent news bulletins on Tuesdays and Fridays.