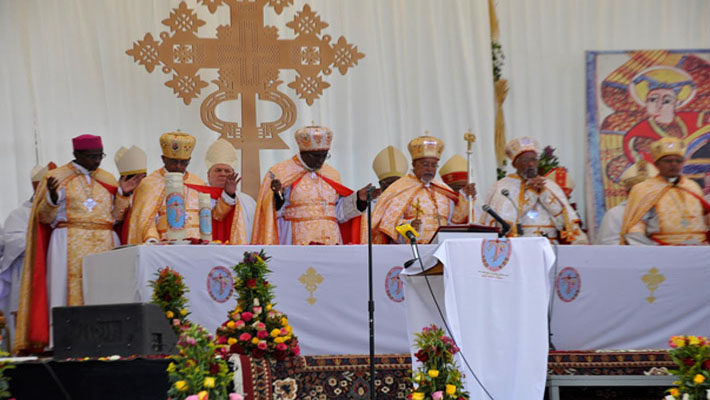 ADDIS ABABA, JULY 17, 2018 (CISA)-The 19th Plenary Assembly of the Association of Member Episcopal Conference of Eastern Africa, (AMECEA) on July 15 commenced with Mass in the Ethiopian Rite practiced by the Church in Ethiopia and Eritrea.

The Mass began with a liturgical dance by the Cistercian Brothers who marched to the altar beating drums and singing. According to Father Hailegabriel Meleku the origin of the dance traces back to the 6th century.

After the liturgical dance, the main celebrant, Cardinal Berhaneyeus Souraphiel, began the Mass with a form of greeting followed by the offertory. The main celebrant then picks out the best bread for the Eucharist, blesses it and wraps it up and processes it round the altar before it is which is then wrapped up till the time of consecration.

The offertory if followed by what is commonly known as the ‘Great Chant’ that takes about 15 minutes.  According to Fr Meleku singing of hymns is usually limited to the beginning and the end of Mass since the Mass is literally chanted throughout.

“What captivated my attention most was the fact that the entire Mass is chanted, there is dialogue and coordination between the main celebrant, the concelebrant and the entire congregation which is a good experience,” Bishop Maurice Muhatia of the Catholic Diocese of Nakuru-Kenya told AMECEA online news.

In a concelebrated Mass such as the one held on July 15, the concelebrants are expected to use lower voices than that of the main celebrant. Most importantly the number of celebrants at the altar must always be odd, Fr Meleku added.

In the Ethiopian Rite the congregation always faces east. This signifies the direction of Jerusalem where the son of God was born.

The offertory was followed by the readings, homily, the creed, the preface, the consecration, the Kyrie after which the reception of the Holy Communion.

Unlike the Roman Rite where readings follow the liturgical calendar, readings in the Ethiopian Rite follow the seasons of the year as in winter, spring, autumn and summer.

According to Fr, Meleku, Christianity in Ethiopia traces its roots to the Ethiopian Eunuch whom the Apostle Philip baptized in (Acts 8:27) in about 36AD. He is believed to have spread Christianity after his return from a pilgrimage in Jerusalem.