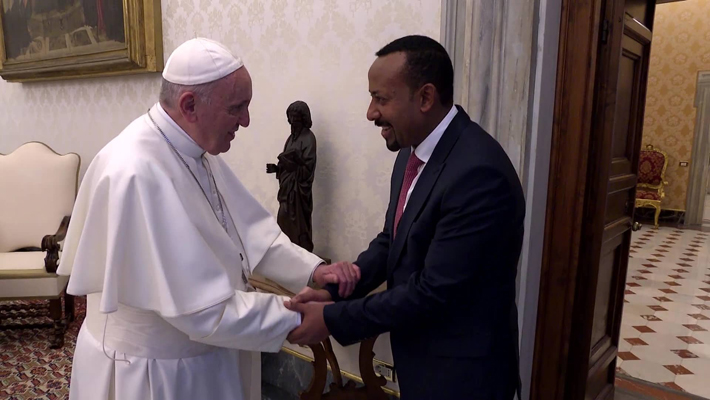 The meeting lasted 15 minutes and Pope Francis gifted the Prime Minister with a copy of his encyclicals, his message of the World Day of Peace, and a medallion with a special message.

“This medallion represents a desert with the grape and an ear of wheat. It is the prophecy of Isaiah, which means that one day the desert will become a garden,” the Pope explained as he presented his gift.

The Prime Minister on his part gifted the Pope with embroidered fabrics that, he explained, “are used to pray,” and a picture with the image of the Risen Christ.

The Prime Minister also met with his Italian counterpart, Giuseppe Conte, in Rome.

“I had a productive discussion with international agencies and the Government of Italy…The comprehensive discussion which I had with Giuseppe Conte in particular was important to take the bilateral relationship between the two nations to the next level,” Dr Abiy told journalists.

Dr Abiy appreciated Italy’s decision to finance the first phase of study of the planned railway line project linking the Eritrean port of Massawa with the Ethiopian capital Addis Ababa.

The Prime Minister also called for enhanced cooperation between Ethiopia and Italy in the areas of development, peace, and tourism. He traveled to Italy for an official visit following the invitation by the Italian Prime Minister during his 2018 Ethiopia visit.