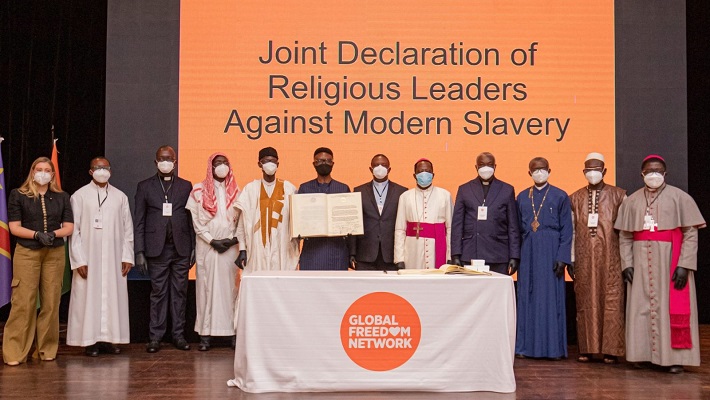 ACCRA, AUGUST 10, 2021 (CISA)– “Faith leaders are able to influence where government and business cannot. They can work as community leaders creating systems change and legal reform, as well as providing moral guidance and education to their congregations,” Grace Forrest a co-founder of Walk Free human rights Group.

She was speaking at an August 6 event that saw religious leaders in Africa commit to the joint declaration of Religious Leaders against Modern Slavery.

“We are deeply honoured to be in Ghana for this signing, and we acknowledge the history of slavery and the exploitation of the people of this country and other parts of Africa, the effects of which are still felt today and are undoubtedly connected to the prevalence of modern slavery in this region,” she said.

Clerics from Democratic Republic of Congo, Nigeria and Cote d’Ivoire joined Ghanaian leaders to sign the commitment. Both the National Interfaith Council of South Africa (NICSA) and the Inter-Religious Council of Kenya (IRCK), who could not join because of Covid-19 endorsed the declaration in absentia.

“Human trafficking is an especially heinous crime. This is because it involves the exploitation and abuse of human beings for profit,” Fr Lazarus Anondee, the Secretary General of the Ghana Catholic Bishops Conference said.

“You can see changes in people that would pass many others by. And you understand what poverty and desperation can do to men, women and children. So you are uniquely placed to identify victims and help victims by putting them in touch with professionals who can help them and who can help deal with the perpetrators,” Sheikh Armiyawo Shaibu, spokesperson for Ghana’s national Chief Imam said during the event.

It is the eighth signing since 2014, when Pope Francis and Grand Ayatollah Mohammad Taqi alModarresi joined other faith leaders in declaring that modern slavery must be eradicated.

The signing event coincided with the launch of the Faith for Freedom smartphone app, which was developed in collaboration with faith leaders to help guide them to tackle modern slavery in their communities and congregations.