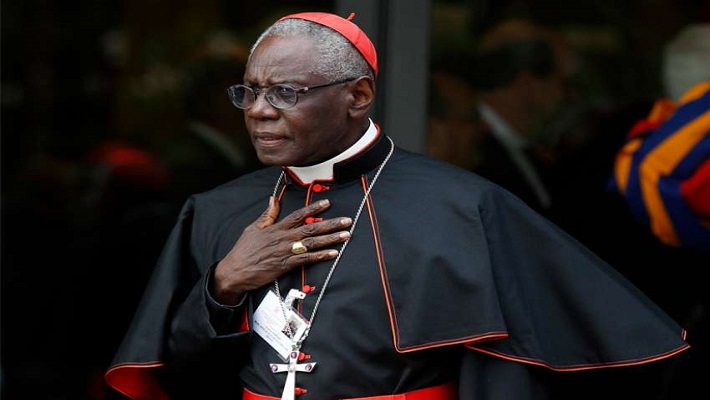 VATICAN, SEPTEMBER 21, 2021 (CISA) – Robert Cardinal Sarah has appealed to the National Committee for Rally and Development (CNRD), led by Colonel Mamady Doumbouya, the leader of the military junta that toppled President Alpha Conde, to transform his ‘good words’ into concrete actions to build a new Guinea.

The former Prefect of the Congregation for Divine Worship and the Discipline of the Sacraments, in a letter written from the Vatican addressed to the CNRD said, “You will need a lot of truth and courage, heroism and determination to sweep around you all the inveterate predators of our Country, corrupt and incompetent who have accompanied the governments of Sékou Touré, Lansana Conté, Moussa Dadis Camara and Alpha Condé, and who consider themselves essential and irremovable elements.”

The Archbishop Emeritus of Conakry cautioned the ruling military to avoid repeating the previous mistakes of 1984 and 2008 when the Guinean people took to the streets after military coups to celebrate their hope for a brighter future, but the army failed to create systems for rebuilding the Nation and the construction of a State of Law.

“This has led Guinea into a situation of increased poverty, despite all the natural wealth that God has given it. For more than fifty years, Guinea inexorably descends into the depths of underdevelopment and endemic misery, and the people of Guinea suffer disappointment after disappointment,” adds Cardinal Sarah in his letter dated September 13.

The prelate, however, warned the military that the recovery and development plan they aim to bring into the country may not succeed if they do not radically change the atmosphere and environment of the Guinean government.

“Stop allowing political leaders to abuse our people and manipulate them in their selfish interests. Our country needs a new generation of political leaders who love their country and their fellow citizens and unite their forces for the peace, unity and development of Guineans, instead of inciting them to hate and kill each other,” the letter reads.

“…give back to the people not only their freedom but above all physical and moral health, more dignified life and a little happiness. Be extremely severe on the military who would like to take advantage of the army’s accession to power to enrich themselves to the detriment of the people,” Cardinal Sarah emphasized.

The Cardinal subsequently urged the President of the CNRD, Colonel Mamady Doumbouya, to treat President Alpha Condé with dignity and release him as quickly as possible.

Robert Cardinal Sarah is a Guinean prelate. He was appointed the Metropolitan Archbishop of the Catholic Archdiocese of Conakry in 1979 where he served for more than 20 years. In November 20, 2010, he was elevated to the office of cardinal and four years later, in 2014, appointed the Prefect of the Congregation for Divine Worship and the Discipline of the Sacraments in Vatican, Rome.