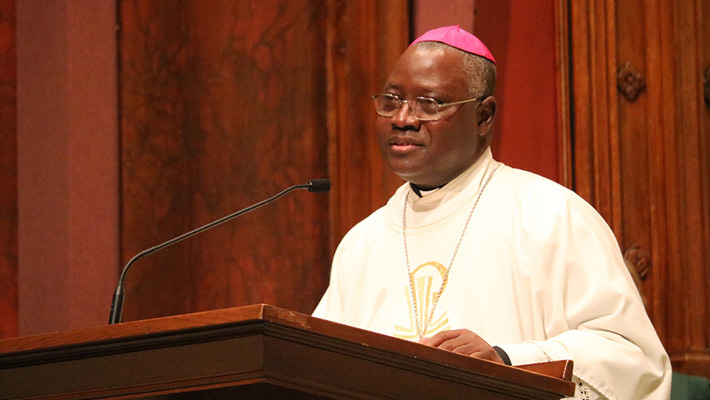 ABIDJAN, FEBRUARY 18, 2020 (CISA) – Archbishop Ignatius Kaigama of Jos, Nigeria and President of RECOWA-CERAO has voiced against massive grabbing of agricultural land in Africa.

In his opening remarks during the 8th Ordinary Session of the Standing Committee of RECOWA-CERAO in Ivory Coast, the archbishop lamented how Africans in South of the Sahara have become poorer.

“…the massive grabbing of these lands, which results in the expropriation of the poorest populations, is done in the name of economic and social development,” Archbishop Kaigama said.

The archbishop noted that once their land has been taken away, the populations are deprived of the natural resources which are essential for their survival.

“Once expropriated from their lands, the populations are deprived of the natural resources essential to their survival. Furthermore, the exploitation made of the immense areas of the grabbed land (often hundreds of thousands of hectares per operation) conforms in no way to the most pressing needs of the populations concerned: living in peace and in a healthy environment, while ensuring the most basic needs of life, including food sovereignty, which depends precisely on the agricultural activity and therefore on access to land, which should be a concern to us as pastors,” he added.

He called for a conversation on land and waters polluted by human activities with concerns on riverine communities who can no longer cultivate the land, bathe and drink the water from the river.

“We are not against development. We simply hope that development does not come at the expense of the rights of populations and the environment,” he said, adding that “to this problem, we must add those equally alarming issues like violence, kidnappings and killings in Burkina Faso, Mali, Niger, Nigeria, etc. Statistics on the kidnappings, deaths due to terrorist attacks in our West African region as supplied by ECOWARN.”