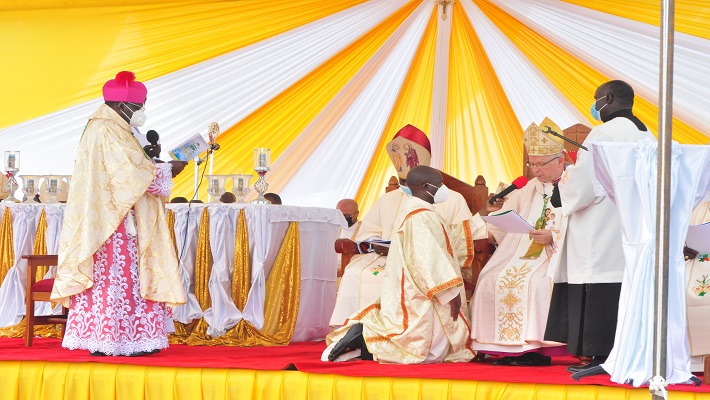 BUNGOMA, FEBRUARY 22, 2022 (CISA) – The Apostolic Nuncio to Kenya and South Sudan, Archbishop Herbertus Marie Van Megen in his homily at the Consecration ceremony of Monsignor Mark Kadima on Saturday, February 19, counselled all prelates to follow in the footsteps of Peter, the disciple of Jesus who despite being human and erring innumerably, was chosen as the rock upon which the church is built on.

“Peter had many flaws but Christ chose him because the father had chosen him, the Holy Spirit was with him and he had faith in Christ,” said Archbishop Van Megen adding further that, “A person does not become a bishop because of his extraordinary qualities so to say which propel him into the episcopal seat but because of the Holy Spirit that comes upon him. He is not appointed because of his many merits but it is the grace of God which is at work. It is not his own thinking and revelation but the thinking and revelation of the father.”

He, moreover, cautioned against clericism pointing out that in his interactions with laity on the pretext of the ongoing synod on Synodality, as a phenomenon that came out strongly urging otherwise that the clergy work in tandem with the people and follow the teaching of the bible about the good shepherd.

The nuncio also celebrated the incoming Bishop as a treasure given to the Catholic Diocese of Bungoma citing his experience all over the world, affirming in his speech that “I have all the confidence that Monsignor Kadima, the Rt Rev Bishop of Bungoma will do very well. He will be the good shepherd for you.”

In the consecration ceremony at Kibabii grounds, Bishop Mark Kadima was handed the doctrinal instruments of power by his consecrators; Archbishop Herbertus Marie Van Megen, Archbishop Philip Anyolo of the Catholic Archdiocese of Nairobi and Archbishop-elect of Kisumu, Rt Rev. Maurice Muhatia Makumba who currently serves as the Bishop of Nakuru.

Bishop Kadima who previously served as the rector at St. Peters Seminary, Mukumu has largely worked in the diplomatic service for the Holy See in various regions including Ghana, Togo, Bangladesh, Greece, Brazil and Colombia. At the time of his appointment, Bishop Kadima was the Chargé d’affaires at the consulate in South Sudan.