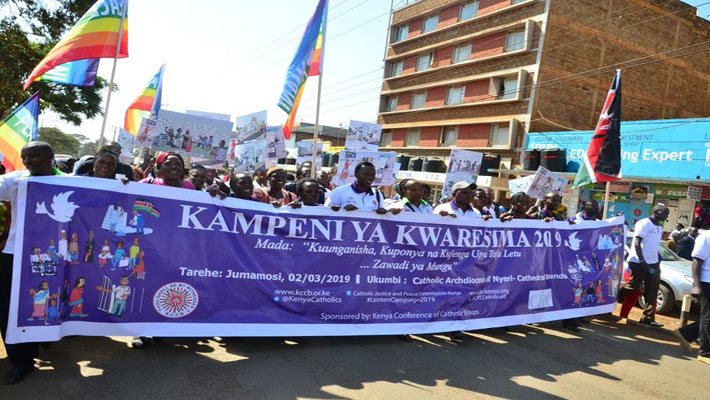 NYERI, MARCH 5, 2019 (CISA)– Archbishop Anthony Muheria has decried the very high levels of corruption and gambling in the country, saying these vices risk destroying the moral fabric of the nation.

“Our families have been broken because parents spend their money in gambling and other luxurious ways. In this country, in all our towns, most advertisements that we have are about gambling. It looks like our children know only one thing – gamble and you will succeed,” he said.

The archbishop was speaking in his homily of Saturday March 2 during the National Lenten Campaign Launch 2019 that took place at the Consolata Cathedral in Nyeri.

“We are going to consider how corruption has brought us on our knees. But we are not reflecting so as to condemn and point fingers. I want to point the finger on myself, so that I begin the battle against the monster of corruption.”

Speaking during the event, bishop John Oballa  Owaa of the Catholic diocese of Ngong, and the Chairman of the Catholic Justice and Peace Commission, said the Church felt the need to advocate for change.

“Through the Lenten Campaign, all Christians and people of goodwill are called to join KCCB in addressing issues on environmental conservation and protection, family values, corruption, socio-political inclusion and respect for the rule of law which will be talked every week from Ash Wednesday to Palm Sunday,” read the Lenten campaign booklet.

The bishops called on faithful to apply the social teachings of the Church in uniting and healing the nation, guided by the theme, “Uniting, Healing and Renewal of Our Nation…God’s Gift.”