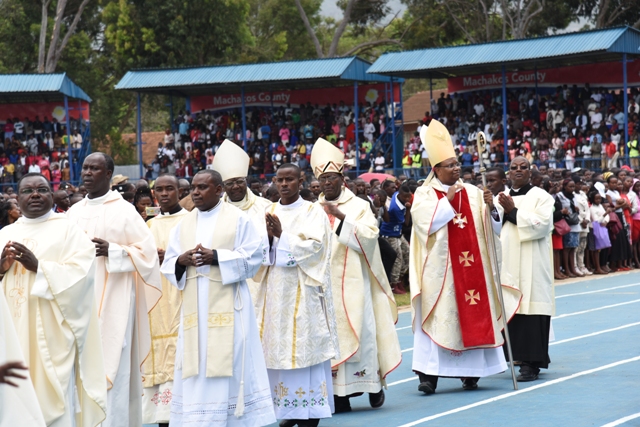 MACHAKOS DECEMBER 1, 2017 (CISA) – Archbishop Anthony Muheria of the Catholic Archdiocese of Nyeri has called on the young people to shun hatred and tribalism.

“We must say no to hate messages, don’t be swallowed by the crocodile of hatred. My young people, today we are being told to open our hearts, harden not your hearts, your hands are meant to be for blessings and not for violence,” said Archbishop Muheria.

Archbishop Muheria who is also the Apostolic Administrator of Machakos urged the young people to be people of hope even when life seems hopeless, asking them to remain focused in life and not to be swayed by wallowing pressures.

The Archbishop was speaking during the National Catholic Youth Convention held on November 25 in Machakos Stadium where he was the main celebrant.

The convention themed “Faith on fire: God’s call, my response” was organised to celebrate Pope Francis’ visit to Kenya in November 2015.

The meeting comes at a time when Pope Francis has dedicated the 15th Ordinary General Assembly of the Synod of Bishops to be held in Rome in October 2018 to address matters pertaining young people.

Archbishop Muheria also called on the young people to give witness to their vocation, by living their baptismal promise.

“The church says today we are not going ahead until we call the youth here,’ stamping the fact of the church evangelising the young people,” he said.

He further lauded efforts of all those actively journeying with youths guided by the Diocesan Chaplains and Youth Coordinators and called on young people to always carry with them the Catholic prayer weapon; the Rosary and remain firm in faith despite the torrents and storms of life.

Story and photo by Daniel Kipng’etich. The writer works for the Catholic Diocese of Ngong, Communication Department.