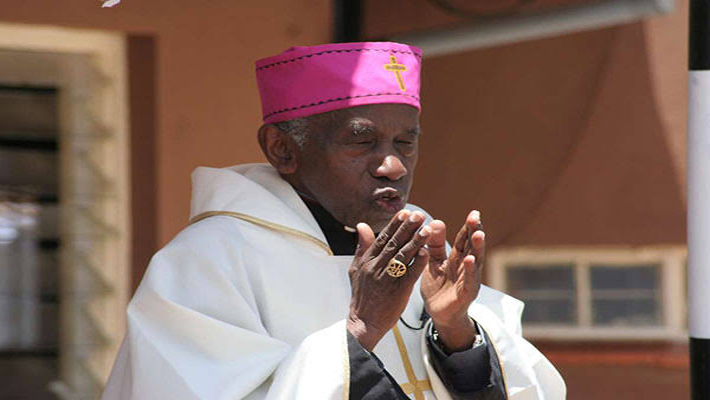 NAIROBI, APRIL 7, 2020 (CISA)– The late Archbishop Ndingi Mwana a’Nzeki emeritus of the Archbishop of Nairobi was buried today, Tuesday April 7, 2020 at a crypt at the Holy Family Minor Basilica in Nairobi.

The burial mass was restricted to 100 people in line with the government’s’ ban on mass gatherings and need for social distancing to help control the spread of the Covid 19 virus that has so far infected 172 people in the country.

In his homily during the burial Mass that was led by John Cardinal Njue, Bishop David Kamau, the auxiliary of the archdiocese of Nairobi said, “We all know the values for which the late his Grace Archbishop Ndingi defended and fought for.  He did not go by the minds of the day, neither was he compromised to be quiet about the ills that were affecting the people then.  He instead raised his humble voice and in the process he ended up opposing strife voices of those in political positions and especially when they were wrong on political, social, and religious standing. Such boldness was motivated by the value he attached in doing good and defending the same, whether it yielded any result for the movement or not.  His motivation was the triumph of good over evil.”

The archdiocese of Nairobi eulogised the late archbishop as a champion of justice, “a man who thirsted, pursued and fought for truth and justice.”

Archbishop Raphael S. Ndingi Mwana a’Nzeki died on March 30 aged 89.   He was born in Mwala Machakos on December 25, 1931. He was ordained priest for the Catholic Diocese of Nairobi on Jan 31 1961 at the age of 29.  He was appointed Bishop of Machakos on May 29 1969 and ordained on August 1, 1969 in Uganda by Pope Paul VI during his Apostolic Visit to Africa.