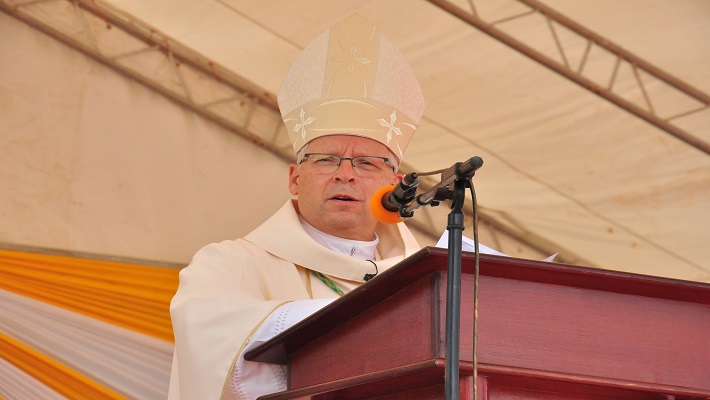 KISUMU, MARCH 22, 2022 (CISA) – Archbishop Hubertus Matthaeus Marie van Megen, the Apostolic Nuncio to Kenya and South Sudan, cautioned the clergy and lay alike against falling into the temptation; and committing, the sin of pride at the expense of the Glory of God by seeking power and wealth, in his homily at the occasion of the installation of the third Archbishop of the Catholic Archdiocese of Kisumu, Rt Rev Maurice Muhatia Makumba on March 19.

Reflecting on the story of David in the Bible, the nuncio said “David had everything his heart desired. Power, wealth, women. He is a king and he has adopted a royal lifestyle and then so to say at the peak of his power when he seems to have everything he becomes aware that he seems to have forgotten the most important thing.”

The Nuncio narrated how David lived in the grandest of palaces and left out building a house for God despite his opulence and the strategic governance of his kingdom. “Yes David, that great king, unfortunately, was living a God-forsaken life. Yes, he claimed that he was a faithful servant of the Lord but basically, he had forgotten about him,” preached the prelate.

“To forget about God, to live as if God does not exist, it happens to nearly every one of us. Yes! We may claim that we believe in God, that even we go to church we say our prayers but looking at it closely, we find out that so many things are more important to us than God. Power, money, desire. And though we serve God with our lips and our hearts, many times he takes the last place. Yes! God will be called upon whenever it is convenient…maybe at the end of our lives when we have to look death into the eye,” he enlightened.

He asked the faithful and clergy alike to have a moment of retrospection if at all they recognized that attitude in their lives and further, the truth in the reality of each person devoting their entire lives to the service of God posing that, “is it more about legacy or even more crudely about income, wealth and power?”

“The same can happen to any leader in the church. People applaud you like they did King David. Your projects are a success. You enjoy respect, power, the many privileges that are granted to you and slowly but surely you lose sight of God, he quipped, continuing, “You are looking for applause. You feel powerful, untouchable. Pride sets in and sin takes hold. Power, wealth, desire, like David. The great King David!”

He urged those who recognize themselves in such a situation not to despair saying that even in the darkest night, God knows how to kindle a light. Even in the most abject evil, God was able to plant the seed of goodness. You may have forgotten about God in your life but God doesn’t forget about you in his life.”