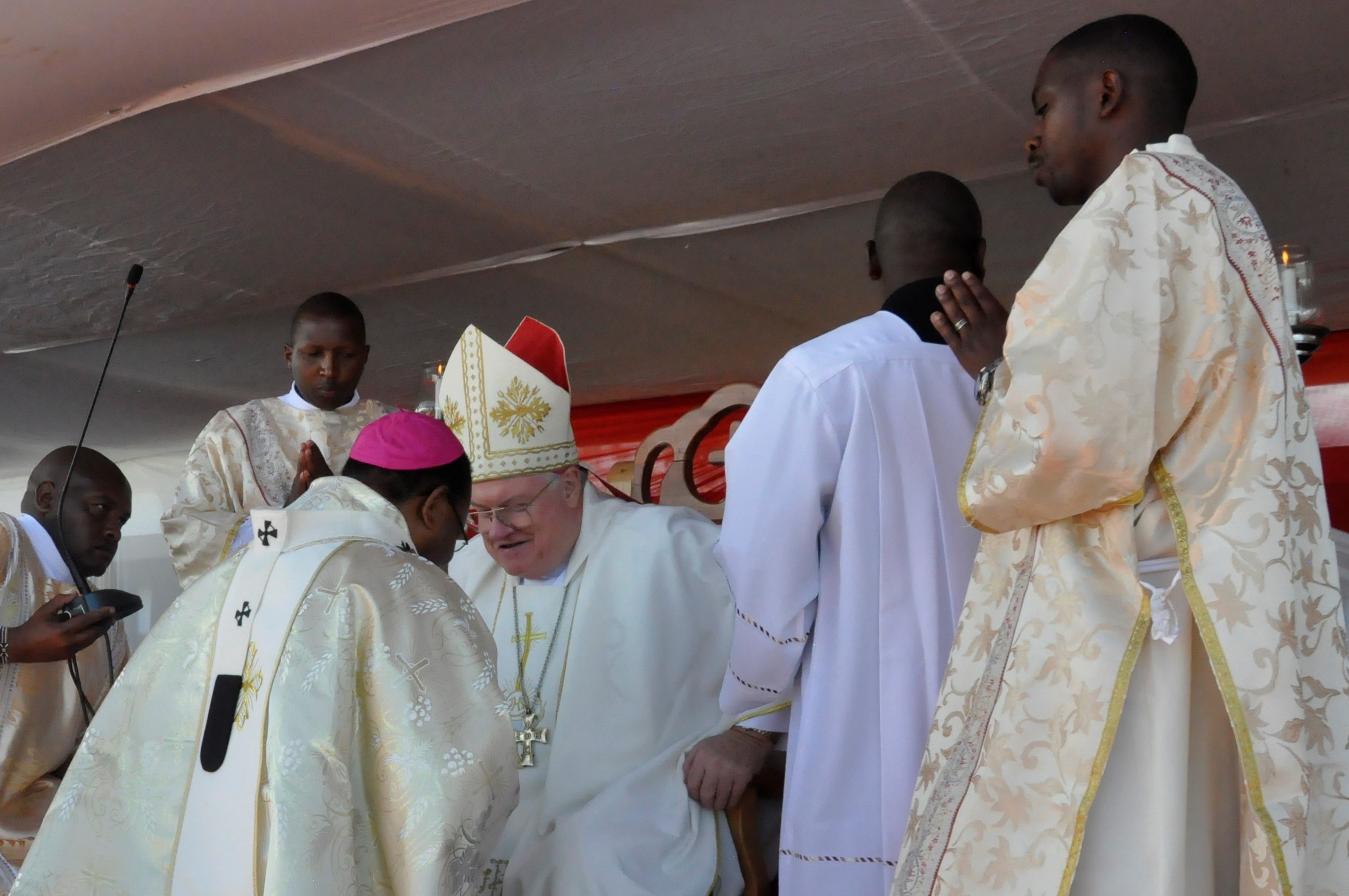 NYERI SEPTEMBER 19, 2017(CISA) – The Catholic Archdiocese of Nyeri, on Saturday September 16, celebrated the imposition of the Pallium on Most Rev Anthony Muheria who was installed Archbishop on June 17, 2017.

Archbishop Daniel Balvo, the Apostolic Nuncio to Kenya and South Sudan formally vested Archbishop Muheria with the Pallium in a ceremony attended by hundreds of faithful at Christ the King Major seminary, on the outskirts of Nyeri town.

In attendance were bishops and representatives and diocesan representatives from the Metropolitan Province of Nyeri including Meru, Marsabit, Muranga, Embu, Maralal and Nyahururu.

The Pallium, a symbol of the bond between an Archbishop and his Pope, is a woolen vestment conferred by the Pope on an Archbishop. It consists of a narrow, circular band placed around the shoulders with short lappets hanging from front and back.

“It is a renewed call to become like Christ the Good Shepherd, who lays down his life for his sheep, and who goes out to look for the lost sheep, carrying it on his shoulders.  I take this opportunity to ask you all for prayers, and support so that I may live up to these calling that the Lord makes to me; and also ask for prayers for all the bishops of the Metropolitan so that united together in communion, we may serve his people always with this spirit of Christ the Good Shepherd,” said Archbishop Anthony Muheria.

In 2015, Pope Francis decided that each newly-appointed metropolitan archbishop would be formally vested at a ceremony held in their own archdiocese, by the Apostolic Nuncio, to allow the participation of the local Church.

Despite this change, Pope Francis still invites each new Archbishop to join him in Rome on June 29 to concelebrate at Mass on the Feast of St Peter and St Paul. The Pope blesses each pallium, and presents it to the Archbishops who are present, privately after the Mass.

Archbishop Muheria received his Pallium from the Pope on June 29, 2017 together with 42 other Archbishops of the world.

“He felt it was more meaningful if the Pallium would be imposed on the archbishop in his archdiocese so that all of you, the people of God of the archdiocese of Nyeri and other dioceses in the area, that you could participate and see what it is that was happening,” explained the nuncio before imposing the Pallium.

This was the second time Archbishop Daniel Balvo imposed a Pallium on an archbishop in Kenya. The first was on December 29, 2015 when he imposed the Pallium to Archbishop Martin Kivuva Musonde of the Catholic Archdiocese of Mombasa.