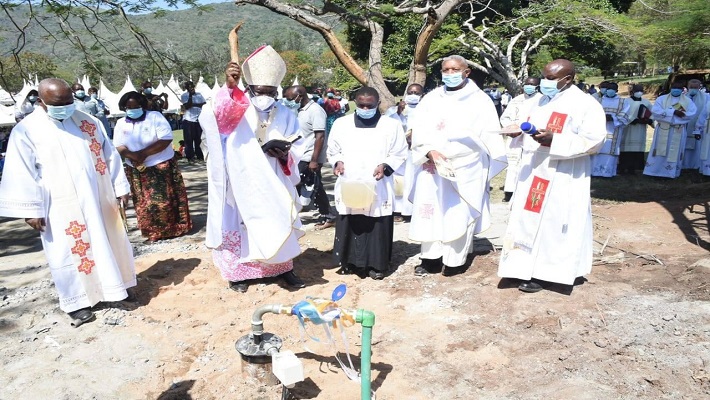 BURA, MARCH 2, 2021 (CISA)-Archbishop Martin Kivuva of the Catholic Archdiocese of Mombasa on February 27 launched the 8th borehole at Our Lady of Hope Shrine, Bura which is one among 50 boreholes the Archdiocese is sinking to curb an acute clean water shortage in the Archdiocese.

According to the archbishop, the water project is supported by the Cross Catholic Outreach from America, in collaboration with Caritas  to help the archdiocese  access clean water.

Addressing the newly ordained priests and deacons, Archbishop Kivuva urged them to promote unity among the people and protect the most vulnerable.

“Work hard in gathering the faithful into one family, that you may be guided by God the Father for the sake of Christ and the Holy Spirit. Fix your eyes unto your good shepherd, who came to serve and not to be served. Who came to seek and save the lost…Let us not discriminate against people of God in view of their tribe, religion or class. Be quick in bringing God’s people together as the flock of Christ,” the Archbishop said.

“Following the example of St. Joseph, be keen to recognize God’s voice through his angels. Purpose to protect, to defend families and to shelter children, the elderly and the defenseless. Protect them and relocate them to safe places,” he added.

The prelate called on them to work towards restoring those who have wandered away from the faith.

“Let us always follow the example of Christ. We are called to be inclusive. Not as a small club of believers, the honest and holy ones. All of us are sinners. Let us bring back all those who have gone away. Am aware there are those who have left the religion and the faith because of our actions and words that drive away rather than draw people to God,” he said.