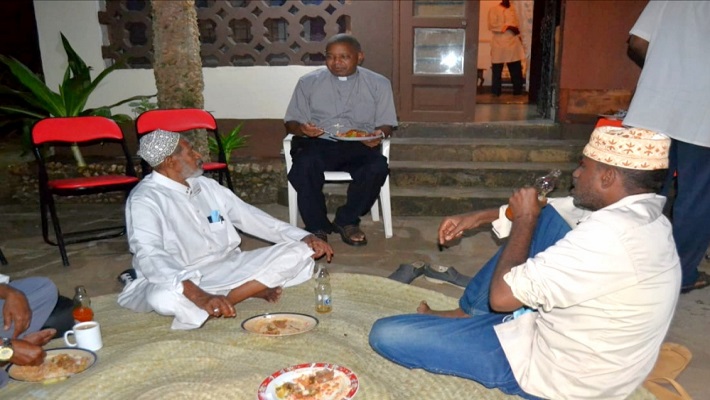 MALINDI, APRIL 30, 2021 (CISA) – Rt. Rev. Willybard Lagho, Bishop of the Catholic Diocese of Malindi on April 26 hosted Muslim clerics for Iftar at his residence where they discussed ways to tackle religious and social challenges facing the region that encompasses Kilifi, Tana River and Lamu counties.

At the meeting, Bishop Lagho noted that it is important that issues affecting the region be addressed by involving all leaders, both political and religious.

“Some of these challenges are deeply rooted in our society and we need to bring together all leaders including the traditional religious leaders to address some of these problems,” said Bishop Lagho who is also the immediate former chairman of the Coast Interfaith Council of Clerics (CICC).

According to Sauti ya Jimbo the communication office of the diocese the bishop and the Muslim leaders  discussed issues like child marriages, teenage pregnancies, street families, drugs abuse, parental negligence, youth unemployment, idleness, child labour, land and boundaries disputes, informal settlements, killing of old people, school dropouts and resource based conflict as among issues they would tackle together.

The bishop said religious leaders through the CICC, shall also bring on board the traditional African religious leaders such as the Kaya elders, to help address some of the problems such as early marriages, teenage pregnancies, killing of the elderly people among others.

The Muslim leaders, led by Sheikh Aboud Bazmaleh, chairman of the Supreme Council of Kenya Muslims (SUPKEM) Kilifi County expressed gratitude at the invitation which they noted indicated a strong bond between the two religions and affirmed the commitment to forge a common stand on issues affecting the region, “…irrespective of religion, tribe and race.”