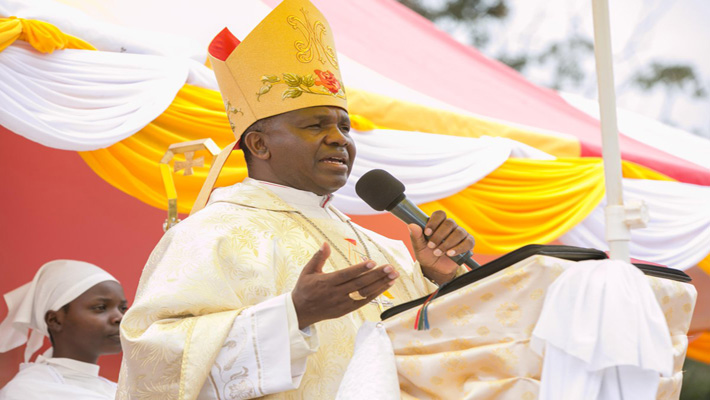 MURANG’A, MAY 8, 2020 (CISA)-Bishop James Maria Wainaina of the Catholic Diocese of Murang’a has condemned plans to test coronavirus drugs in the country, calling on Kenyans to remain vigilant on research agencies that plan to lure the poor with money.

“Kenya is not the worst hit country in Africa and in the world. One is left wondering about the wisdom of choosing Kenya as the testing ground for the vaccines and drugs,” reads the May 7 statement released during the launch of the Murang’a Diocesan Covid-19 Response at Our Lady of the Rosary Catholic Parish, Kutus.

The prelate was reacting to a publication in the local dailies which disclosed that local researchers participating in an international study are seeking final approval from agencies to test three drugs on Kenyans.

Although President Uhuru Kenyatta said in April that no clinical trials in relation to coronavirus were planned in Kenya, the government has remained silent on the May 5 media reports.

“If the two agencies of research mentioned in the Nation Newspaper have already obtained initial approvals, it would be important for our government to tell Kenyans how they got the approvals,” the bishop said, questioning whether there was any public participation or approval by the parliament.

While acknowledging that Covid-19 is a grave matter at hand and search for cure is acceptable, the Bishop insisted that it should not be used to compromise the rights and dignity of the citizens.

“Given that vaccines or drugs may have side-effects on the citizens, we must be convinced of the safety of the same and preservation of the citizen’s dignity,” he said further suggesting that the tests be done “with maximum openness, and testing should not be carried out on unsuspecting citizens.”

“Poverty, it must be said, or sickness does not remove the dignity of a person. The dignity of the poor must nevertheless be protected,” he added.

Bishop Wainaina called on the authorities to deny the mentioned agencies entry into the country until the safety of Kenyans and their dignity are guaranteed. He also called on President Uhuru Kenyatta not to allow any medical practice by local or foreign agencies that would compromise the dignity of Kenyans.