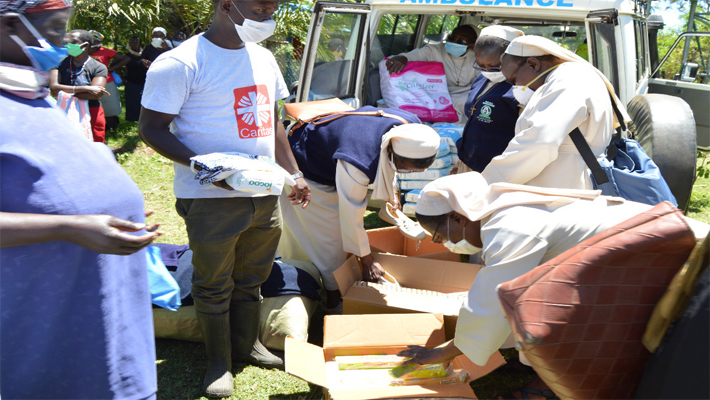 KISUMU, MAY 8, 2020 (CISA)-Fr Samuel Nyataya, the diocesan Caritas Director in the Catholic Archdiocese of Kisumu, has called for construction of dykes and frequent inspection of existing ones on major rivers as part of the long-term solution to frequent flooding in the region.

“Some of the dykes fill up with silt interfering with the normal flow of the water. The environmental department needs to advise people on where to put up houses because interference with the environment puts us into this situation where it is either too dry or flooding uncontrollably,” Fr Nyataya said in an interview with CISA.

Flooding in parts of the archdiocese began in September 2019 but became severe in April 2020 when several rivers burst banks due to persistent rains up hill. The subsequent floods destroyed homes and farms affecting around 13,000 households, according to Caritas Kisumu which has been visiting those who have been displaced, offering food, non-food stuff, counselling and medication.

This emergency response dubbed “Baskets of Solidarity” was put in place by Archbishop Philip Anyolo the local ordinary, to locally mobilize fund through Caritas Kisumu to aid those who have been affected.

Caritas Kisumu is working closely with priests and community in the affected areas to help in identifying affected families for aid distribution.

“The corona virus pandemic forced people to stay at home but unfortunately floods have removed them from their homes, it is a double tragedy and a concern for the people. We thank God that until now we have not experienced any case of coronavirus in Kisumu,” Fr Shadrack Malo the Parish priest of Our Lady of Perpetual Help Ahero Catholic Parish, one of the parishes severely affected by floods after River Nyando burst its banks.

The priest who is also the Kisumu Diocese Communications Coordinator noted that unlike in the past when the parish would accommodate families displaced by the floods this season the floods have been so heavy that the catholic complex consisting of pastoral center, convent, priests’ residence, St. Anne’s Primary School, and Ahero Girls’ Secondary School has not been spared.