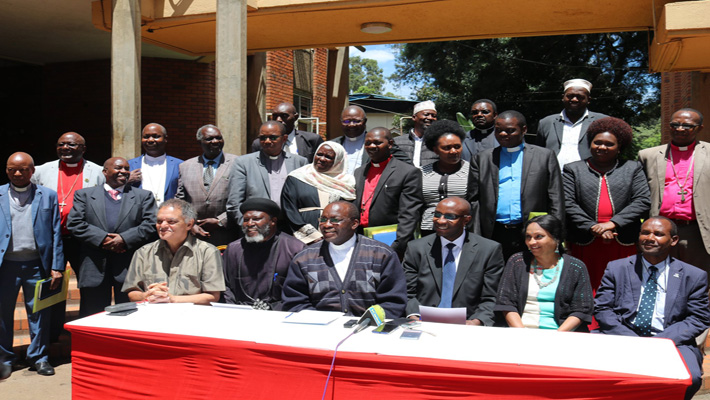 NAIROBI, MARCH 6, 2020 (CISA)-The Dialogue Reference Group (DRG), a convention driven by religious leaders in Kenya, has expressed concern that developments in national debate on the Building Bridges Initiative (BBI), have pushed the country to a state of heightened political emotions

Speaking March 5 at a meeting held in Nairobi, the clerics urged political leaders to avoid divisive debates on the Building Bridges Initiative and called on President Uhuru Kenyatta to stop all political rallies that have the BBI as their agenda.

“We largely attribute the confusion and discord being witnessed in the country to the pervasive ignorance of the majority of Kenyans on the contents and recommendations in the BBI Report,” the statement reads,” they said.

“We wish to remind all Kenyans that the Building Bridges Initiative was established to unite the country following the chaos and violence that emerged from the 2017 General Elections. It is a major concern to Kenyans that the BBI, which was presented as a solution to the political crisis is now tearing the country apart,” they lamented.

“Kenya deserves to have a properly constituted IEBC to undertake the constitutionally mandated review of the boundaries of electoral units, and conduct the referendum if one is called to effect necessary reforms,” they said.

Calling for a reform process that is objective, inclusive, issue based and non-divisive, they noted that reforms must not be used as the arena for fighting political, religious and ethnic supremacy battles.

“Any amendments made to the Constitution of Kenya 2010 must be the culmination of a structured dialogue process that genuinely seeks and receives the views of Kenyans who are well informed through a nationwide civic education process,” they said.

Addressing the ongoing desert locust infestation, threat of spread of coronavirus, and the extra judicial killings by the police, the clerics noted with concern that the government, despite timely and adequate warnings by experts, failed to put in place measures to minimize the impact of the locust invasion.

They called on the Independent Policing Oversight Authority and the Kenya National Commission for Human Rights to speedily investigate the spate of Extra Judicial Killings of the youth by the police.

“Extra judicial killings are a blatant disregard of the sanctity of life and an affront to the laws of Kenya which provide for arrest and prosecution of suspects,” they said.

The Press statement was signed by Archbishop Martin Kivuva of the Catholic Bishops; Conference of Kenya (KCCB) Bishop Peter Njau of the Evangelical Alliance of Kenya, Susatha Katampa of the Hindu Council of Kenya, Rev.Canon Chris Kinyanjui of the National Council of Churches of Kenya (NCCK), Rev Fr Joseph Mutie of the organization of African Instituted Churches, Pastor ALFRED Marundu of the Seventh Day Adventist Church,Abdalla Mohammed of the Shia Asna Ashri Jamaat and Abdalla Kamwana of the Supreme Council of Kenya Muslims.