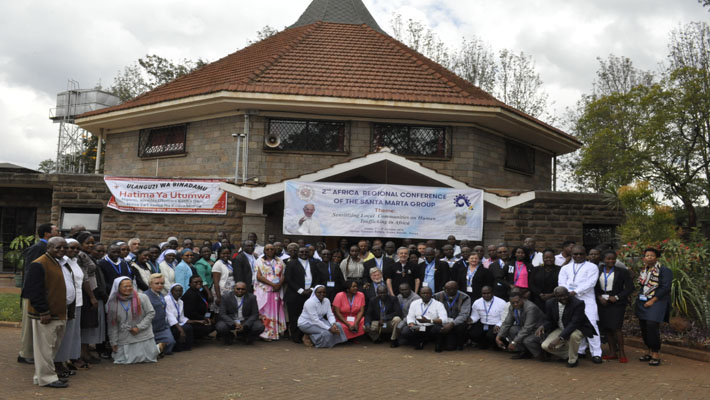 NAIROBI, OCTOBER 4, 2019 (CISA)-The second African Regional Conference of the Santa Marta has ended with a call to the Bishop’s conferences in Africa to pay special attention to the fight against human trafficking by creating special desks within the conferences and in the dioceses to address human trafficking.

“Each Bishops’ Conference and diocese to create a Desk dealing with Human Trafficking in the spirit of Santa Marta. Bishops Conference to identify hot spots/endemic to address three levels of human trafficking being origin, transit and destination that facilitate human trafficking,” read part of the recommendations in a communique issued at the end of the conference held in Nairobi October 1 to 4.

The conference themed, “Sensitizing the local communities and Government on dangers of Human Trafficking,” brought together over 100 delegates from nine countries including: Kenya, Sierra Leone, Angola, Uganda, Nigeria, South Africa, Eswatini, Ghana, and the United Kingdom including representatives from the Church, Law Enforcement Agencies, regional and international actors, and organizations that work in the areas of migration and control of human movements.

Archbishop Philip Anyolo, Chairman of the Kenya Conference of Catholic Bishops while officially opening the conference on October 2, noted that, “Issues of labour, cargo and drivers of human trafficking can be addressed if we aim and focus on creating effective partnerships and collaborations that purpose to cut the umbilical code of modern-day human trafficking and slavery.”

In his good will message to the conference, Vincent Cardinal Nichols, President of the Santa Marta Group saluted the hard work done by the delegates and noted that the fight against human trafficking is as urgent and as important as ever.

“We have to remember that human trafficking is a hugely profitable criminal activity and those who drive it forward are endless both in their greed for profit and in their callous disregard for the dignity of every person. They must be stopped; and victims rescued, cherished and supported,” he said in a speech read on his behalf by Fr Mark Odion.

He urged the conference to look hard into factors contributing to this evil trade such as poverty, lack of opportunity, corruption, and the endless movement of people.

“Modern Slavery / Human Trafficking happens within our own communities, and anyone can be a victim as traffickers use extensive manipulation to control their victims,” he said.