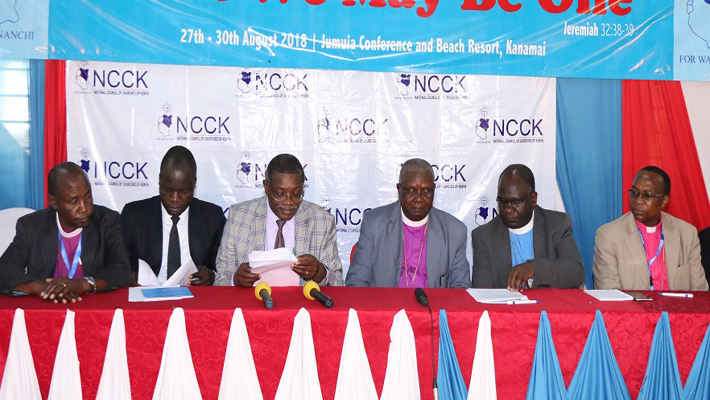 KILIFI, AUGUST 31, 2018 (CISA)-The National Council of Churches of Kenya has called on the government to do more to address issues facing the nation.

In a statement released  at the Council’s 63rd General Assembly held on August 28 -30  Conference and in Kilifi, the Council noted that while the government has made steps in fighting corruption and bringing peace among citizens through the handshake and  the Building Bridges  Initiative Taskforce, there are still more problems that citizens are grappling with.

“… We appreciate the appointment of the Building Bridges Initiative (BBI) Task Force by President Kenyatta and Rt Hon Odinga. However, that process is not adequate to address the issues facing Kenyans,” it said lamenting that.

The BBI Taskforce was created by President Uhuru Kenyatta and Opposition leader Raila Odinga after their March 9, 2018 meeting to end hostilities fanned by the controversial 2017 General Elections, to evaluate the national challenges facing Kenya, and make practical recommendations and reform proposals that build lasting unity.

In the statement, they also recommended security sector reforms which would consider a medium term strategy to merge the Administration and Regular police services and increase their capacity of policing and enhance the welfare of security officers.

“Develop and implement a policy and strategy to end corruption in the police services, Implement the National Action Plan for Gender Sensitive Peace, Conflict and Peace, Re-orient the security officers to stop use of lethal force in crowd control, End extra judicial killings which target poor young men and women in slums and Competitively recruit the new Commissioners of National Police Service Commission when the current team’s term expires,” it said.

They also called upon Parliament to legislate a law to provide and secure meaningful public and stakeholder participation in the extractives sector.

“Of key focus in such laws and policies is adequate compensation of citizens who are disenfranchised by the extractives ventures, and the benefit that community members derive from the exploitation of resources found in their locales,” it reads.

They further advised the government to enhance devolution by Emphasizing patriotism and goodwill, Increase funds channeled to the counties, Enhance public participation in matters devolution and ensure all functions that the Constitution requires to be devolved are actually devolved and the national government does not interfere with such.

The council also recommended the engendering of national and dialogue processes.

“This is in recognition of the key role that women play in society, and the fact that they suffer the most during crisis and violence,” they said.

They also called on the government to address the high cost of living.

“We note that a first step in this direction is reduction of the taxes and tariffs that citizens are required to pay, and rationalizing the aptitude of government to borrow colossal amounts of money to set up roads,” it said.