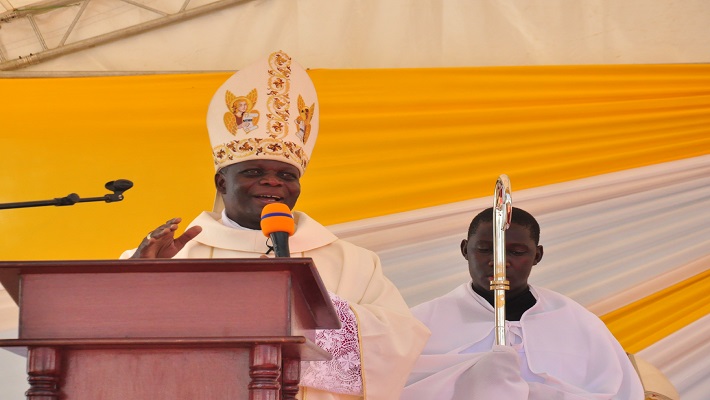 KISUMU, MARCH 22, 2022 (CISA)-Archbishop Maurice Muhatia Makumba during his first address on March 19, as the third archbishop of the Catholic Diocese of Kisumu took time to expound on his coat of arms comprising three symbolisms.

“Duc in Altum are the word of Jesus addressed to Simon “put out into deep water and pay out your nets for a catch (Luke 5:4). Jesus after teaching from the boat of Simon asked him to launch the nets into the deep for a catch of fish for which they had laboured the whole night to no avail. It is instructive that the success of Simon peter depended upon his obedience to Jesus’s imperative instruction,” he explained.

Duc in Altum is the Latin for “put out into the deep” or “casts into deep water”. According to Archbishop Muhatia, “This motto is the key to understanding the coat of arms.”

On the coat of arms, at the top is a Host inscribed with the IHS monogram of the name of Jesus, derived from the first three letters of the Greek. It is over a chalice with grains of wheat and a branch of grapes on the sides, symbols of the Eucharist. This he says implies him dedicating his “episcopate in the catholic archdiocese of Kisumu to the blessed sacrament of the altar, the sacrament of the body and blood of Jesus Christ.”

“I dedicate my episcopate to Jesus in the Eucharist because he is the true anchor of our life who sends us on a mission to go and cast into the deep for a human catch,” he adds.

On the lower part of the log on the left; is a man on a boat on a large mass of water. On his hand, there is a fishing line and fish on it. In the background is a mountain with birds in the sky. This he says is a symbol that resonates with the motto of my court of arms and of his episcopate Duc in Altum which is found at the very bottom of the coat of arms.

“It is my desire that by the obedience of faith comparable to that of Simon, I together with the entire family of God in Kisumu may both experience the multiplication and at the same time become ambassadors of it.”

On the right-bottom of the coat of arms is an anchor. On top of it is inscribed what looks like an XP, which are the first two letters of the word ‘Christ’ in Greek.

He says “The anchor is one of the most ancient Christian symbols which reminded Christians in the most difficult times that Christ is their safety.  By using it, echoes the word of Hebrews 6:19 ‘We have this hope as an anchor for the soul firm and secure’.”

“Together with the letter to the Hebrews I say to you my dear faithful of Kisumu, we have this hope as an anchor for the soul, firm and secure. The vision and mission for the archdiocese shall be driven by this conviction and as the Lord told Simon so he tells us do not be afraid,” he expounds.

He said, “I am aware of the great work that has been accomplished in this archdiocese by my predecessors, particularly in the last 50 years. Working on and with this rich history of faith, it is my desire to keep the hand on the plough and never to look back. It is my yearning that together as an archdiocese we may launch our nets into the deep and may nourish together as the family of God at the banquet of his ministries.”