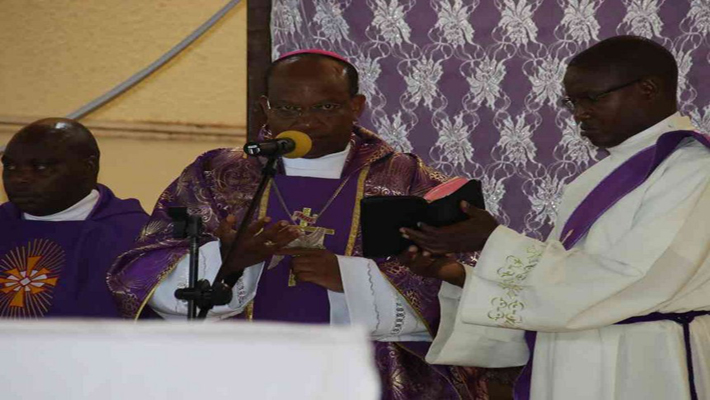 The archbishop was speaking on Thursday, August 8 at St Joseph’s Junior Seminary in Mwingi during a requiem Mass for ten pupils of St Gabriel’s Primary School who perished in a tragic road accident on Saturday August 4.

“We need to come up with policies and guidelines to ensure safety of our children on the roads,” Archbishop Muheria said in his homily.

He also called for the counseling of the school community and the affected families.

Archbishop Muheria noted that the accident could have been avoided and lamented the loss of young lives.

In attendance were the bereaved families, political leaders, officials from the Ministry of Education and catholic faithful from the Catholic Diocese of Kitui.

The accident occurred on Saturday night after the driver of a lorry coming from Mwingi town lost control and collided with the school bus before the bus rolled and landed o the side in Kanginga River.

Eight pupils died on the spot and one at the hospital. Another one died at Kenyatta National Hospital (KNH), where four pupils had been transferred.

According to Mwingi Officer Commanding Police Division (OCPD) John Nyamu, the school bus had 44 passengers comprising of 40 pupils, three teachers and a matron.

The Cabinet Minister of Education Ambassador Amina Mohammed emphasized that firm action will be taken against managers whose schools flout traffic regulations.

She said that the ministry is working closely with relevant government agencies to find the cause of the accident before submitting a final report to the ministry for further action.

“Once again, we condole with the bereaved families and wish those still in hospital, a speedy recovery. We will support the entire school fraternity and the affected families throughout this difficult period,” she stated.