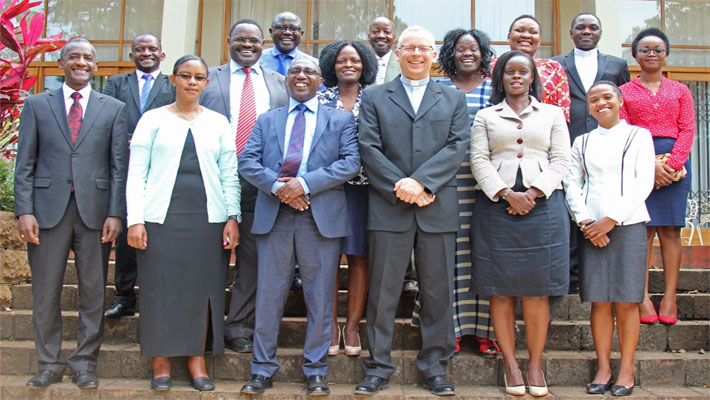 NAIROBI, AUGUST 30, 2019 (CISA)- Catholic Professionals in Kenya have called for greater involvement of the lay people in the life of the Church and society

Each speaker echoed the need for continuous formation of lay people in the Catholic Social Teachings as a way of deepening their ability to participate in the Church’s mission of evangelization.

“The Church needs to train and appoint more passionate priests to chaplains to accompany the youth in their formation in the Church. The Church should listen more and respond to the needs of the youth while involving them in making decisions on matters that affect them,” Olive Maria the outgoing coordinator of International Young Catholic Students said.

“As CAMPSSI we provide spiritual support for Catholic MPs. We provide a link between the Church and parliament on matters that require legislation,” said Hon. Innocent Momanyi, Member of Parliament for Bobasi constituency and a member of CAMPSSI.

In his remarks, Dr. Wahome Ngare of Catholic Doctors’ Association observed that synergy among all Catholic professionals is imperative.

He mentioned that that emerging issues like the recent proposal for Human Papillomavirus Vaccine being administered on girls as young as 10 years is something that should elicit concerted effort among all Catholics.

Archbishop Bert Van Megan said he was impressed with the Church and the faith of the people of Kenya. He equated the professionals to yeast, who despite being few, are able to permeate every part of the society.

The group also proposed a National Prayer day for Catholic Lay leaders at Subukia National Shrine on every second Saturday of August starting 2020.

They made a commitment to national discourses on matters such as education and constitutional reforms, civic education, social audit of devolved governance, public leadership and environmental protection and promotion.

Gracing the meeting was Fr Emmanuel Mulu, the Advisor to the Nuncio and National Chaplain of the Kenya Movement of Catholic Professionals.