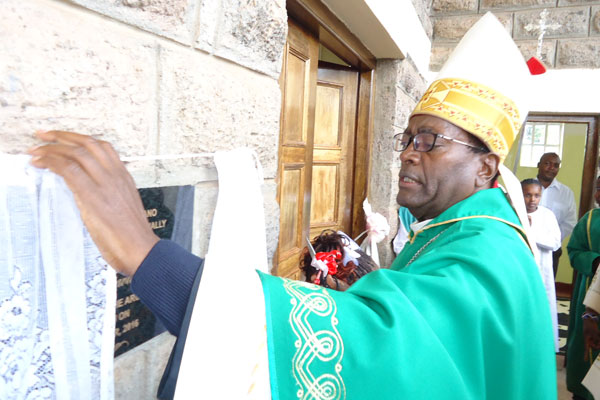 NAIROBI DECEMBER 19, 2017(CISA) – “We need to mentor our boys to transform them into responsible men by instilling in them the virtues of courage and self-esteem and empowering them to live a value-based life,” Bishop David Kamau, the Auxiliary Bishop of the Catholic Archdiocese of Nairobi has said.

The Bishop was speaking at Shrine of Mary Help of Christians, Don Bosco Upper Hill Catholic Church in Nairobi during the launch of Beacon Boys Project, an initiative aimed at empowering and mentoring the boy child in the society, reported People Daily newspaper.

Bishop Kamau said that the project would develop an alcohol and drug abuse intervention programme in response to the problems the boys face.

The program which an initiative of the Catholic men Association and sponsored by Britam holdings Plc aims at salvaging boys between the age of 9 and 17 years who are adversely affected by social distracters.

The idea was informed by the recent statistics that demonstrate a big number of young boys, who have either consumed pornographic content or had an encounter with drugs.

According to statistics shared by Dominic George, a counselling psychologist attached to the Nairobi Catholic Archdiocese, out of 141 boys who had been enrolled in the program, 121 had watched pornography while 92 had attempted drugs.

“Our survey also showed the strong positive influence the presence of a father figure has on the lives of the children. Seven out of ten juvenile prisoners were either fatherless or had poor relationship with their fathers,” he added.

Benson Waregi, Britam Group Managing director said the status of the boy child had been sidelined lowered in the society.

“The society seems to have forgotten that boys are just as vulnerable as girls and must be empowered too,” said Mr Waregi.

The initiative aims at reaching 50 parishes of the Catholic Church within the Archdiocese of Nairobi.The programme will target boys aged between 9 and 17 initially in 20 schools before it is rolled out countrywide.