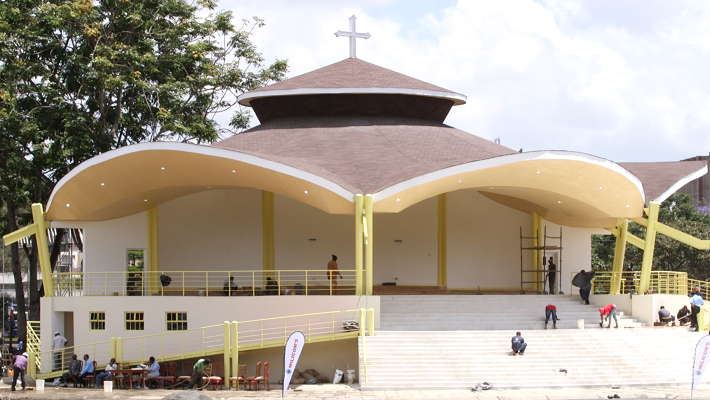 NAIROBI, MAY 11, 2021 (CISA)-Archbishop Anthony Muheria, Chairman of Commission for Pastoral and Lay Apostolate of the Kenya Conference of Catholic Bishops, has lauded the decision by the Government of Kenya to declare the 2015 Papal Dias as a national monument.

In a May 9 statement to CISA, the archbishop noted that the monumental dais was a significant symbol in remembrance of the Pope’s message to the country during the 2015 visit.

“The declaration of the Papal Dias as a National monument recognizes the great significance Pope Francis visit was for Kenya and the Kenyan people. This is a great gesture to immortalize in a physical way the powerful message Pope Francis had for Kenya pronounced on the various sites he visited,” Archbishop Muheria said.

“His powerful message of “peace and harmony” that is a constant fall back for our country still struggling with tribalism and division. His great message of hope especially to the young people, and above all the powerful and prophetic challenge he gave to the Nation, through his address to the young people: An invitation to totally shun and reject corruption as a way of life; To be patient and look for short cuts in life; To reject radicalization of any sort; and to refuse to be controlled by the dehumanizing bias of tribalism,” the statement by the archbishop of Nyeri adds.

The Government of Kenya through a Kenya Gazette Notice Number 40114 dated March 31 by Cabinet Secretary Amina Mohamed of the Ministry of Sports, Culture and Heritage declared the Papal Dias located at the University of Nairobi grounds a monument.

“In exercise of the powers conferred by section 25 (1) (b) and (e) of the National Museums and Heritage Act, the Cabinet Secretary for Sports, Culture and Heritage declares the building specified in the Schedule, which she considers to be of historical interest, to be a monument within the meaning of the Act,” reads the notice in part.

According to the declaration, the monument shall consist, “All that building known University of Nairobi Papal Dias and the surrounding compound measuring approximately 1 acre on geographical coordinates 36°48’47.22″ E and 146’36.61″ S, situated within University of Nairobi sports grounds in Kilimani Sub-location, Nairobi City County.”

The dias, constructed and designed by Tectura International, an international architectural and design firm, was used as an altar for the Pope’s address to thousands of Christians during his 2015 visit Kenya.

“We are happy with this decision which calls on all of us, to remember the prophetic words Pope Francis delivered during his 2015 visit to Kenya,” said Archbishop Muheria.

Also declared as national monuments through the same gazette notice were the Granary of the Kikuyu in Thuti Sub-location, Othaya Township Location, Nyeri County, and the 16th Century Ngomeni Shipwreck which is underwater [depth of 7-10 metres] in Ngomeni Bay, Ngomeni Village in Gongoni Ward, Kilifi County.