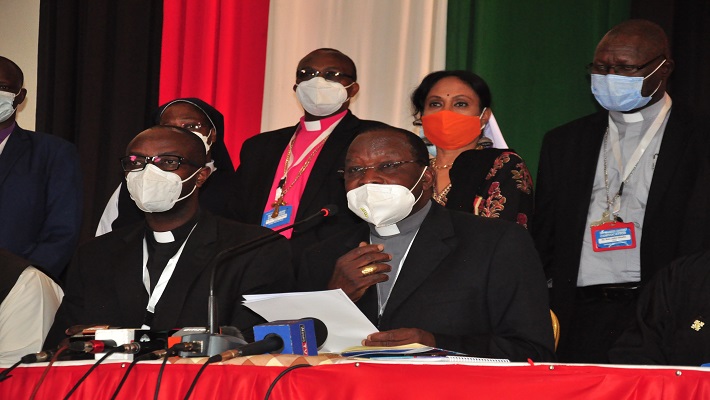 NAIROBI, JANUARY 21, 2022 (CISA) – “This Convocation is deeply concerned that the nation is apparently not ready for the Elections 2022. Corruption, impunity, lawlessness, insults and incitement to violence are happening with abandon, and Kenyans are sinking deeper into despair and depression,” reads a communique by the 3rd National Religious Leaders Convocation, meeting from January 19 to 20, at Ufungamano House in Nairobi, Kenya.

The communique read by Archbishop Martin Musonde Kivuva of the Catholic Archdiocese of Mombasa and Chairperson of the Dialogue Reference Group (DRG), observed with regret that political leaders, “have deliberately neglected to address the issues of electoral justice, which exposes the nation to a repeat of the pre and post-election violence and crisis witnessed in the past.

The religious leaders drawn from all over Kenya are adamant that the country’s moral and social structures are threatened and require rebuilding to secure the upcoming General Elections. The leaders noted that ‘there is work pending in Parliament’ and committed to engaging legislators to prioritize the election-related laws.

“Of note is the need for the completion of the Campaign Financing (Amendment) Bill 2020; Framework for Realization of the 2/3 Gender Rule; Political Party Primaries Bill; and other,” read the communique.

The Church leaders also observed with grave concern that the Independent Electoral and Boundaries Commission (IEBC) is heavily impeded from executing their mandate of delivering “quality of elections” as envisaged in Article 81 of the Constitution of Kenya 2010.

In delivering their action points, the convocation opined that the lack of civic and voter education of citizens is the weak link in the democratic system of the country.

“This is driving the prevailing voter apathy that results in Kenyans either absconding the elections or voting for the richest candidates rather than the best qualified,” they said.

The religious leaders offered to mobilize Kenyans, especially the youth, to register as voters and deliver messages of peace, and national cohesion through the pulpits and related forums.

Today, with the country witnessing heightened early political campaigns and cases of hate speech and incitement to violence increasing, the convocation warned that this widespread impunity propagated by political leaders if not, ” stopped forthwith, the political actors will foment violence before, during and after the 2022 Elections.”

The religious leaders therefore committed to “reach out to His Excellency President Uhuru Kenyatta and appeal to him to disengage from the succession politics” so that he can foster the presidency as a symbol of national unity.

The Convocation also resolved to engage the Deputy President, His Excellency Dr William Ruto and other state officers, “to point out the widespread perception that they are using public resources and institutions to undertake partisan and early campaigns.”

Besides, the Religious leaders committed to dialogue with all political actors and most importantly the Presidential candidates, to accept the outcome of the elections or seek redress in the courts of law.