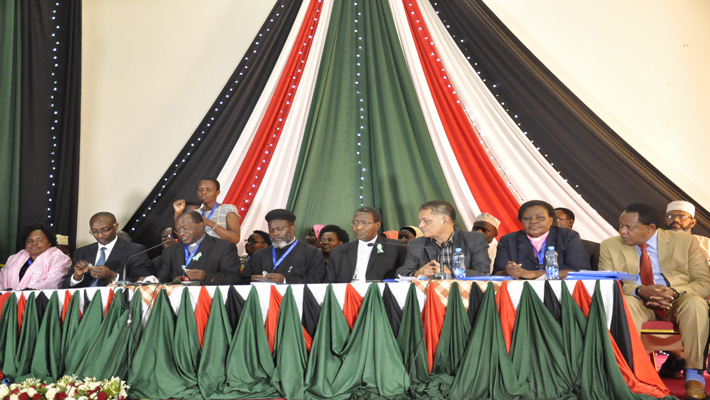 NAIROBI, DECEMBER 6, 2019 (CISA)-Religious leaders in Kenya through the Dialogue Reference Group has called on all Kenyans to avoid divisive debates on the recently launched Building Bridges Initiative (BBI) report saying many recommendations therein have the potential to transform Kenya to a better nation.

“Having taken time to review and understand the report by the BBI taskforce, we have recognized that there are many recommendations that have potential to transform Kenya to a better nation,” the religious leaders said in a communique released at the end of the second Religious Leaders Convocation that was held in Nairobi on December 4,5.

“We recognize our concurrence with the taskforce on the need for expansion of the executive, the need to dignify the opposition to deflate the winner takes all nature of politics, the tax relief for small businesses established by young Kenyans and efforts to curb unemployment, strengthening of devolution by increasing the capacity of county governments to deliver services, the fight against corruption,” the religious leaders said in the part by Most Rev. Martin Kivuva Musonde of the Kenya Conference of Catholic Bishops (KCCB), and chairman of the dialogue reference group and Asha Gahuri of the Hindu Council of Kenya.

The religious leaders further urged the government to speak as one to avoid dividing the people saying that as religious leaders, “…we appreciate that the handshake between President Uhuru Kenyatta and Right Honorable Raila Odinga not only facilitated calmness in the country, but has also produced strong content for the national dialogue process.”

“We therefore urge all Kenyans to read, discuss and debate the BBI report, whether individually or in groups, so as to effectively participate in the dialogue on the same.  There is need for all Kenyans to avoid divisive debates on the BBI Report, and we especially urge the government to speak as one to avoid dividing the people,” they said.

The leaders also pointed out that some proposals within the BBI report required consultations and refinement. These include the establishment of the office of the Prime Minister to ensure it reflects national consensus on an inclusive executive, strategies and solutions for national reconciliation, healing and cohesion, involvement of political parties in the appointment of the Independent Electoral and Boundaries Commissioners, strategies for implementation of Chapter 6 of the constitution in its entirety and strategies for implementation of gender equity at all levels

Others who signed the statement include Bishop John Warari Wakabu for the Evangelical Alliance of Kenya, Rev. Canon Chris Kinyanjui for the National Council of Churches of Kenya, Rev. Fr Joseph Mutie for the Organisation of African Instituted Churches, Dr F. S. Abdalla of Shia Asna Ashri Jamaat and Abdalla M. Kamwana for the Supreme Council of Kenya Muslims.

The meeting brought together more than 300 religious leaders from different faiths across the country.