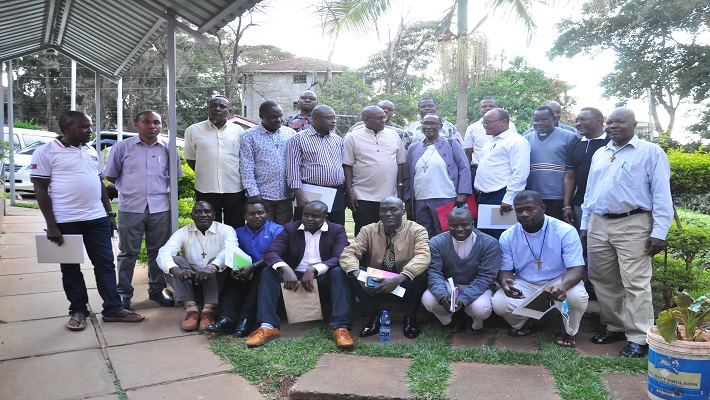 NAIROBI, MARCH 25, 2022 (CISA) – “They can institutionalize the fight… If they can prioritize human trafficking project within their dioceses – we know it is not a war to be won today or tomorrow or the next day – that would work well. And they are the only ones who can do that in the diocese because they have the touch of their coworkers; the clergy. Without that emphasis and guidance, it will be taken as just another issue,” said Fr Samuel Waweru, the coordinator of the Catholic Peace and Justice Department (CJPD) in the Diocese of Nakuru at a workshop organized by Religious Against Human Trafficking, (RAHT) in conjunction with RSCK and funded by the Hilton Foundation on March 24, to sensitize male religious on human trafficking.

Fr Waweru who was speaking at the end of the one day training held at Rosa Mystica, Nairobi suggested that the whole idea of fighting the inhuman act, ought to be listed directly under the Kenya Conference of Catholic Bishops Catholic Justice and Peace Department (KCCB- CJPD) at diocesan levels for it to be properly institutionalized.

The religious superiors also advocated for the use of local media to create awareness with their specific congregations being ambassadors, “Almost every diocese has a radio (station) or means of communication, whether magazine or whatever. We can also use these, come up with programs that can bring up awareness and sensitization creation,” said Fr Peterson Ndegwa, the Catholic Peace and Justice Department (CJPD) coordinator and Caritas Director in the Catholic Archdiocese of Nyeri.

The superiors resolved that it is upon them and their fellow religious brothers and sisters to sensitize their congregations, on human trafficking.

“We who are here should go and create that awareness. Secondly, we who are here [should] not be the perpetrators, accomplices, accessories as well as consumers of the same (human trafficking). We can do that. It is not far away from us,” said another member urging, albeit on a light note, that the religious tame the consumer appetite.

In his opening remarks, Br Julius Awino, BSJ, maintained that “the mission of the RSCK is to sensitize the mission agents to have some knowhow to deal with such cases and basically to disseminate the same information so that it may reach as many people as possible. Especially on its dangers.”

The Human Trafficking RSCK’s Clergy workshop that brought together men religious superiors drawn from different congregations within Kenya were also asked to lobby parliament through its contacts with catholic members of parliament so that stringent laws are passed to curb human trafficking as well as develop a curriculum that can be used to educate people on human trafficking.