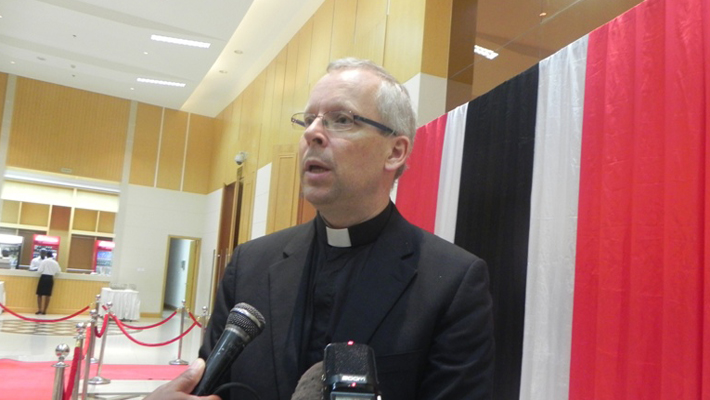 “Bishop Linus was not a saint as most of us are not saints and he suffered on his own sins and weaknesses and was well aware of them. On the other hand, the awareness of one’s sinfulness is the beginning of holiness because only the humble sinners pleading for forgiveness will receive pardon,” he said in his homily during funeral Mass.

The Nuncio while referring to Bishop Okok’s episcopal Motto, “Here I am Lord Send Me,” noted that it sounds like a battle cry, when soldiers are getting ready to go to the front, “But maybe his greatest hurdle came in 2002 when he had to step down. That was probably a battle he had not foreseen. But he took his early retirement of surprise, never complained, and never claimed though there might have been a thousand reasons to complain, claim or even to refuse. Bishop Linus did not,” Archbishop van Megen said.

“This bishop who took care of his priests had now to experience neglect of self and sometimes loneliness and abandonment. In unexpected way his life was conformed with Christ. Even in his sickness he did not complain, did not despair. He followed Christ though he was rejected and abandoned and misunderstood he remained active to the end, kept on serving the Church and its people in many ways,” he added.

“Death teaches us not to conform to the earthly values of glory, power and money and the desire of the flesh but to tune our lives to those values that remain in death; hope, love goodness, truth justice and mercy. The more our lives are rooted in those values the more assured we can be of our final entrance into the kingdom of God,” Archbishop van Megen stressed.

Governor Cyprian Awiti of Homa bay County led a delegation of political leaders from the region to the event.  Bishop Okok died at 67 and was buried at St Paul’s Cathedral in Homa Bay.