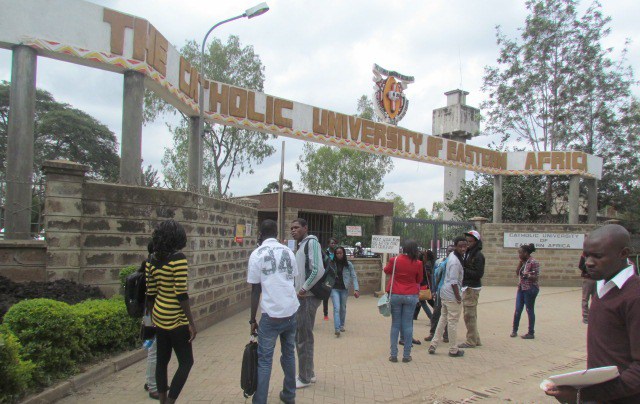 NAIROBI JANUARY 26, 2018 (CISA) – The Commission for University Education (CUE) has recommended that the Catholic University of Eastern Africa (CUEA) and Kenya Methodist University (KeMU) be given a year to restructure their operations and get a sound financial footing failure to which their charters should be revoked.

In a multi agency report dated January 22 and which was compiled last year, CUE called for a forensic financial audit of the two universities to establish their financial stability, suitability and ability to function optimally.

In the report that had been submitted to the then Acting Education Cabinet Secretary Fred Matiang’i, CUE further recommended that the letter of interim authority awarded to Presbyterian University of East Africa in 2007, be revoked.

If the minister approves the recommendation and gazettes it, the university will start winding up its activities, a matter that has triggered uncertainty among learners, lecturers and parents.

However, CUE will have to ensure that students complete studies or are transferred to other institutions.

In response, Prof Justus Mbae, Vice Chancellor CUEA said that the university is already:“implementing a turnaround strategy that involves restructuring and rationalization of its administration staff, and other resources aimed at ensuring sound financial operations.”

Prof Mbae said that the University’s Board of Trustees (BoT) and Council are actively involved in implementing this turnaround strategy.

“This includes BoT’s approval and direction with regard to bailing out the University to ensure the debt-burden, arising from infrastructural investments, is reduced to manageable levels; this is ongoing,” he said today in a statement posted on the university’s website.