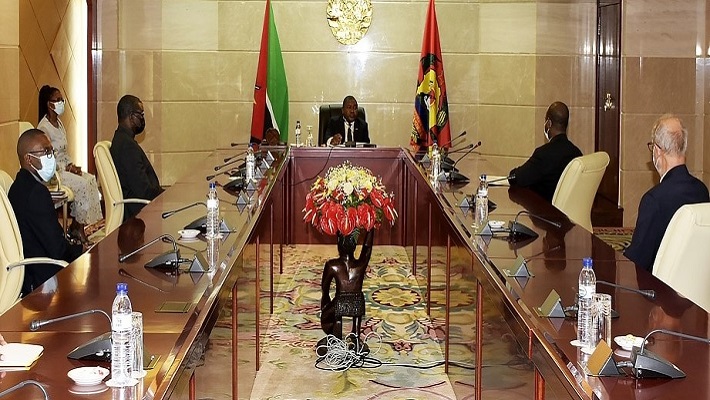 CABO DELGADO, APRIL 30, 2021 (CISA) – His Excellency President Filipe Jacinto Nyusi on April 22, hosted members of the Episcopal Conference of Mozambique (CEM) led by its chairman Bishop Lucio Andrice Muandula of the Catholic Diocese of Xai-Xai where they discussed issues affecting the country especially the recent terrorist attack in Cabo Delgado.

“It was a private meeting that we requested to speak with His Excellency the President of the Republic and bring some opinions from the Episcopal Conference of Mozambique on the situation of the country in the different aspects ,” said Bishop Lucio Andrice Muandula.

According to Bishop Muandula, the meeting with the president was to find a solution to the security issue in Cabo Delgado which has been undermined since 2017 where young people are exploited and being used to perpetrate violence.

“The Church wants young people to live a life different from the one they are currently leading, which is why we encourage people, especially young people, to try to cultivate their hopes and dreams, and to work towards their realization,” said Bishop Muandula.

“We recognize that one of the strongest impulses that motivate our young people to allow themselves to be seduced and join the various forms of insurrection, from crime to terrorism, or even that other insurrection, no less harmful, of political or religious extremism, is based on the experience of a lack of hope in a favorable future,” reads a statement released by CEM April 14.

On April 27, the Inter-Regional Meeting of the Bishops of Southern Africa (IMBISA) also met in Johannesburg to assess and reflect on the socio-political and ecclesial situation in Southern Africa region.

“The unfortunate developments in the Cabo Delgado Province in Mozambique, especially in the town of Palma. They have affected the situation of the general population in the region, especially on the difficulties faced by young people,” reads a statement signed by Bishop Muandula, President of IMBISA.

According to the statement, IMBISA has made an appeal and invited Southern African Development Community (SADC), the African Union (AU) and the government to be more engaged in addressing the unfolding crisis in Cabo Delgado.

“We appeal to the Mozambican Government to spare no effort in engaging the International Community so as to address the violence in Cabo Delgado.  We also appeal to the governments in the region to rethink the economic systems,” the bishops said.

On March 24, an attack by Islamist militant insurgents on Palma, a city in Cabo Delgado province, led to seizing of the city, attacking and destroying shops, banks, and government buildings. The attack resulted to loss of human lives and more than 700,000 people were left homeless.