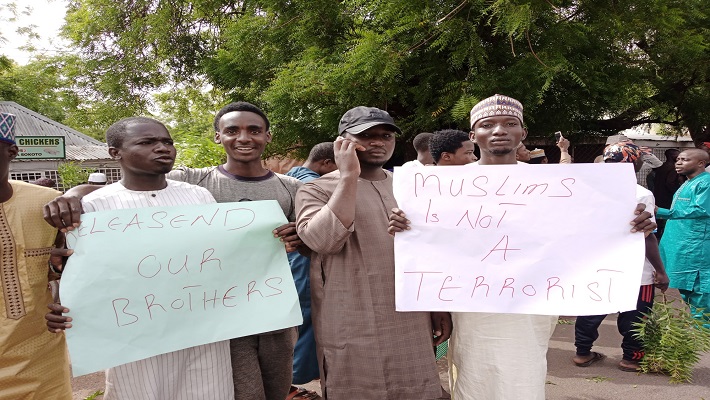 SOKOTO, MAY 17, 2022 (CISA) – Little is known about the social media platform and details of what could have led to the stoning to death and eventual burning of Deborah Yakubu Samuel, aged 25, a student at the Shehu Shagari College of Education in Sokoto State, Nigeria. The Christian college student is alleged to have committed blasphemy on a WhatsApp group platform that was formed for the students.

According to Global Information Network, a fellow student by the name “Rakia” recalls that the unfortunate events leading to the death of Deborah started when someone asked her how she passed last semester’s exam and she replied it was “Jesus o.”

“Immediately, about three other chats came in from two Muslims and one Christian, telling her to retract the statement. Two students from other departments told Deborah’s close friends to prevail on her to retract the statement. But she replied via a voice note: “The group wasn’t created for that but rather as a notice on a test, assignment, exam, etc., not these nonsense religious posts,” recalled Rakia.

It is believed that a group of young men crying ‘blasphemy’ were led into the school. They dragged her from school, flogging and stoning her and then covering her with tires, which were set on fire.

“Those in the class took her to the security post where a cab was waiting to drive her to the police station. Unfortunately, the mob overpowered everyone who tried to save her. They even threatened to kill anyone who attempted to stand in their way,” said Rakia.

She says Deborah’s last words were “what do you hope to achieve with this?”

The news of Deborah’s killing has drawn sharp criticism to the spate of religious strife in Nigeria with Most Rev Alfred Adewale Martins of the Catholic Archdiocese of Lagos condemning the act and terming it “appalling, provocative, and inhuman.”

“I feel very saddened by the callous manner Deborah Yakubu’s life was cut short in her prime by a bloodthirsty jungle justice mob. It shows how little the value that some people place on human life is. This act once again attests to the fact that much still needs to be done in this country for us to appreciate the fact that every human life is sacred and invaluable, something to be nurtured and never trivialized. When you murder a fellow human being on an allegation of blasphemy you have not only committed murder but have sown the seed of hatred, and suspicion and triggered corresponding negative emotions that could snowball into a deep crisis. No one has a right to arbitrarily shed human blood. It is not in our constitution; it is not in our customs or tradition. Such an act is archaic and reprehensible and should be expunged totally from our DNA. All those found culpable in this killing must be made to face the consequences and we must all ensure that justice is seen to be done,” the archbishop condemned in a press release dated May 14.

A statement released by the Catholic Diocese of Sokoto on May 15, stated that the Sokoto State Government has declared a 24-hour curfew to stem the ongoing protests embarked upon by Muslim youth in the state capital who demand the release of their compatriots who were arrested on charges of masterminding the killing.

The diocese also reported “During the protest, groups of youths led by some adults in the background attacked the Holy Family Catholic Cathedral at Bello Way, destroying church glass windows, those of the Bishop Lawton Secretariat and vandalized a community bus parked within the premises. St. Kevin’s Catholic Church Gidan Dere, Eastern By-pass, was also attacked and partly burnt; windows of the new hospital complex under construction, in the same premises, were shattered,” and “The hoodlums also attacked the Bakhita Centre located along Aliyu Jodi Road and burnt down a bus within the premises.”

The Bishop of Sokoto Diocese, Most Reverend Matthew Hassan Kukah, also condemned the murder saying “what happened has nothing to do with religion as Christians have been living peacefully with fellow Muslims in Sokoto over the years.”

The bishop, however, called on the Sokoto state government and the relevant authorities to investigate the incident to ascertain the cause of the action and bring the perpetrators to book while also commending them for acting promptly by declaring the curfew, and the security forces for moving in swiftly to stem the violence to avoid further loss of lives.

The bishop appealed to Christians to remain law-abiding, and pray for the return of normalcy and the repose of the soul of Deborah Yakubu. He also suspended all Masses until the curfew is lifted.

According to Global Information Service, President Muhammadu Buhari, the Sultan of Sokoto, Muhammadu Sa’ad Abubakar III, and others have condemned the violence while several other Muslim leaders defended the action. Chief Imam of the Abuja National Mosque, Prof. Ibrahim Maqari, justified the murder on his Twitter page, warning those who broke the religion’s red lines would face severe consequences. Anas Mohammad Sani, a government official in Sokoto, also threatened that Christians in Nigeria would be killed if they said anything derogatory about the venerated Prophet Muhammad.

In a study of Religious Violence in Contemporary Nigeria: Implications and Options for Peace and Stability Order by Kamal-deen Olawale Sulaiman, the challenge of religious violence casts serious doubt on the stability and order of the country.

Sulaiman points out that “The category of conflicts exists mostly in the Northern part of the country where the main protagonists are Hausa/Fulani Muslims and Christian ethnic minorities. The ‘pagan question’ it has been argued, seems to play a major role in creating a climate of suspicion and intolerance among the groups.”