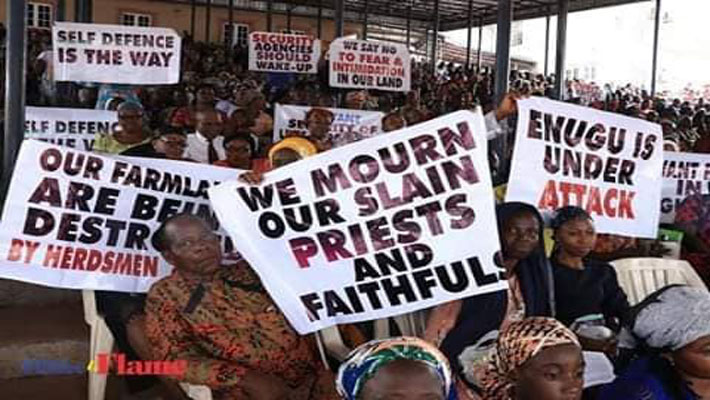 ENUGU, AUGUST 6, 2019 (CISA) – Bishop Callistus Onaga of the Catholic Diocese of Enugu has decried the government’s leniency in tackling rising insecurity in Enugu, and in the whole of Nigeria.

“We seem to be living in a state of anarchy, total breakdown of law and order. In recent times, an alarming number of our people including priests and government officials has been killed by these murderers. The rate of kidnappings has continued to increase both in the villages and in the cities. The demand of outrageous ransom and the inability of the victims to pay, have led to outright killings,” he lamented.

The bishop was speaking August 4, as the diocese held a special Mass for peace and security in the state and the country at the Holy Family Arena, Holy Ghost Cathedral Enugu.

He further decried the fact that people are afraid to embark on their normal farming activities, to
move freely on the roads or visit their homes in the villages, saying that such evils have hampered peaceful coexistence and development in the region.

“…we demand that government should as a matter of urgency, flush out bad Fulanis from our state and effectively equip the vigilante groups to provide protection and security for their various localities,” he said.

“In this era of technology, the deployment of surveillance devices has become very necessary in our effort to combat these security threats,” he added.

He also urged  traditional leaders, town unions and various youth organizations to work together and speak with one voice in order for the security measures they put in place to be effective and successful.

“Our people must know that they are part of actions to provide security and should say something when they see something.”

“The government should formulate policies and enact laws that would checkmate these atrocities that are being meted out on our people and provide counseling and other services to victims of these bad Fulani people,” he added.

Armed militia, from the semi-nomadic Fulani community have reportedly been causing mayhem in parts of Nigeria, attacking kidnapping and killing people.