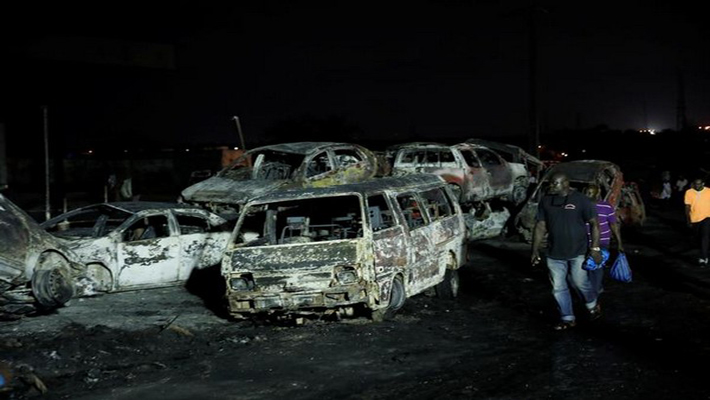 LAGOS, JUNE 29, 2018 (CISA)-Nine people have been confirmed dead, four others badly injured and 54 cars burnt after an oil tanker exploded in Lagos.

The 33,000 Litre fuel tanker crashed at Otedola Bridge along Lagos-Ibadan expressway after its brakes failed, and rammed into a passenger vehicle, causing the tragic explosion that spread from one car to another on the road.

According to an eyewitness interviewed by Channels Television, the explosion occurred on Thursday, June 28 at about 5 P.M.

“By the time the dust was settled, we counted 54 vehicles that were burnt and recovered nine bodies burnt beyond recognition, four others sustained various degrees of burns,” confirmed Lagos sector commander Hyginus Omeje.

“As we speak, rescue operations are ongoing, removing the wreckages off the road so that we can fully open the road again,” Said Commander Omeje.

He cautioned motorists to avoid driving too close to one another on the road, which he says made it easy for the fire to spread from one car to the other. “If there was the right following distance between the vehicles in that traffic, perhaps the damage would not be this extensive,” he said.