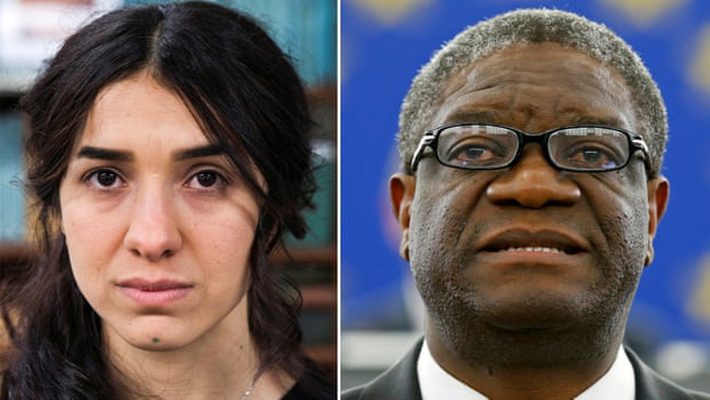 OSLO, OCTOBER 5, 2018 (CISA) – Denis Mukwege, a gynaecologist and surgeon in the Democratic Republic of Congo, and Nadia Murad, a Yazidi woman from Northern Iraq are the 2018 Nobel Peace Prize winners.

The Norwegian Nobel Committee, Berit Reiss-Andersen, on October 5, in Oslo, Norway announced the winners who have been championing efforts to end the use of sexual violence as a weapon of war and armed conflict.

“Both laureates have made a crucial contribution to focusing attention on, and combating, such war crimes,” said Reiss-Andersen.

As a gynaecologist and surgeon, Mukwege was recognized for being at the forefront in treating thousands of women and girls affected by rape and sexual violence in the Democratic Republic of Congo. Murad, on the other hand, is the witness who tells of the abuses perpetrated against her and others during the time she was held as a sex slave by ISIS, reported by CNN.

“Each of them in their own way has helped to give greater visibility to wartime sexual violence, so that the perpetrators can be held accountable for their actions,” continued Reiss-Andersen.

Mukwege has been in practice since 1999 when he founded Panzi Hospital in Bukavu, eastern DRC.

“You just can’t imagine how a smile, a simple handshake, to just tell them ‘be encouraged’ is important to them. To feel they are loved, to feel they can finally find love and affection,” said Mukwege in a previous interview with CNN.

Murad became a victim of sexual violence in August 2014 after an ISIS attack on her community where her mother and six of her brothers and stepbrothers were executed.

She is the second youngest recipient of the Nobel Peace Prize and the 17th woman to win the price.