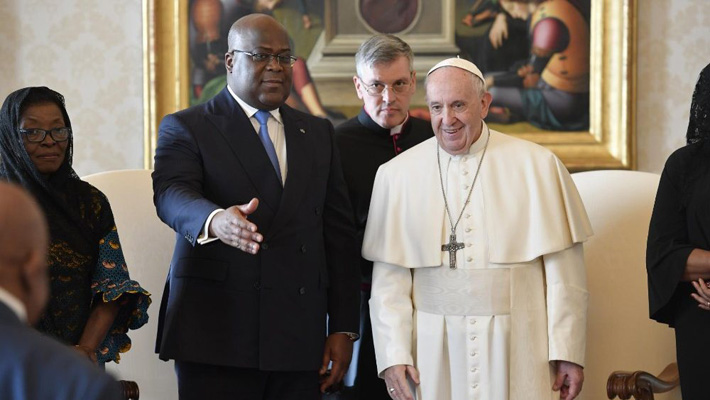 VATICAN, JANUARY 17, 2020 (CISA)- Pope Francis on January 17 received President Félix Antoine Tshilombo Tshisekedi of the Republic of Congo in audience at the Vatican.

According to a statement published by the Holy See Press Office during cordial discussions, the parties evoked the, “…good bilateral relations along with the satisfaction at the ratification of the Framework Agreement between the Holy See and the Democratic Republic of the Congo on matters of mutual interest.”

Their discussion also highlighted the contribution of the Catholic Church in the democratic process, and in promoting the common good and integral development of the nation, especially in the fields of education and healthcare.

Pope Francis and President Tshisekedi also discussed the grave humanitarian crisis, in Congo, the need to protect human dignity, suffering of the population and the Ebola epidemic.

They also discussed the country’s current situation, with particular reference to the sufferings of the population in the eastern provinces, due to persistent armed conflict and the spread of the Ebola virus.

“Finally, mention was made of the urgency of collaboration and cooperation at national and international level, to protect human dignity and to promote civil coexistence, starting from the many refugees and displaced persons who are facing a grave humanitarian crisis,” read the statement.