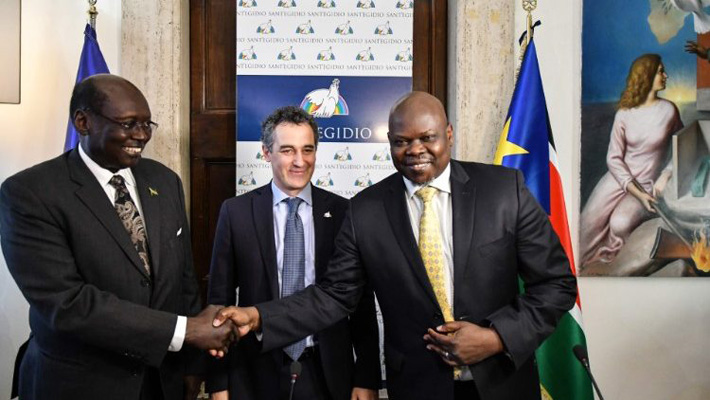 Representatives from the two factions signed a peace declaration on Sunday, January 12 at the end of peace talks held in Rome and facilitated by the Catholic community of Sant’Egidio. The declaration went into effect from January 15.

Those who signed the Rome Declaration on the Peace Process in South Sudan included representatives of the opposition groups in SSOMA, who refused to sign an earlier peace agreement in September 12, 2018 in Khartoum, and the Sudan People’s Liberation Movement (SPLM) and National Democratic Movement (NDM) as witnesses.

“We have accepted the cessation of hostilities, and therefore there will be no confrontation between the forces of the opposition and that of the government. It means there will be relative security, and would allow the mobility of South Sudanese locally and international visitors, like His Holiness the pope as early as February,” said Dr Sunday De John, Communications Director for the opposition alliance.

“South Sudan is a country that is made up of Christians, notably of the Catholic faith. We believe in His Holiness the pope, and should he come to South Sudan — even if the opposition is unable to be there for security reasons — we will be happy because our country is our symbol,” he added.

Paolo Impagliazzo, Secretary General of the Community of Sant’Egidio said that faith played an important role in the South Sudan peace talks hosted in Rome on January 11-12.

“All of them are Christians, so for them to start a meeting with a prayer was very important. They attended Holy Mass on Saturday evening with Sant’Egidio … The fact that Pope Francis is so engaged in their country for them is something that they cannot forget,” Impagliazzo said.

The Community of Sant’Egidio is a lay Catholic movement centered on peace and helping the poor. The community has previously worked with the peace process in Mozambique and the Ivory Coast.

In the declaration, the government and the opposition recommitment to the Cessation of Hostilities Agreement of December 2017 to cease armed confrontation in South Sudan, and to allow humanitarian access to local and international organizations.

IGAD, the UN’s Intergovernmental Authority on Development, participated as observers.