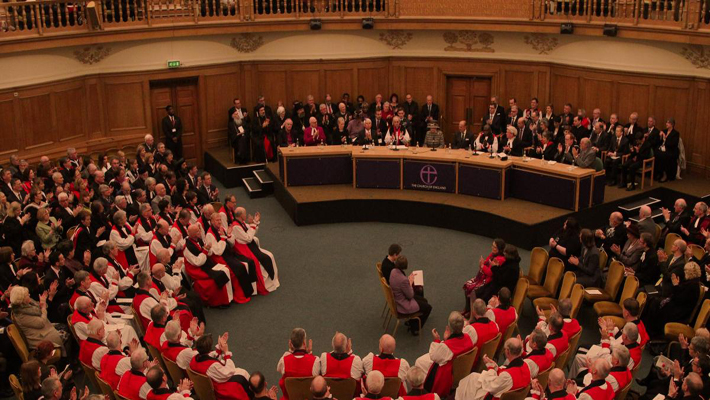 VATICAN CITY, OCTOBER 9, 2018 (CISA)-Cardinal Dieudonne Nzapalainga, of the Archdiocese of Bangui, has called on clergy to make the Word of God the central referral point while teaching and guiding the youth in today’s society.

The cardinal was addressing journalists Saturday October 6, during the Synod of Bishops on young people Faith and discernment, that is running from October 3-28 at the Vatican City.

“The whole world is gathered here and is asking, what does God want to say to us today through the young? …in the midst of crises and difficulties we need to refer to God’s word because he is a rock to us,” said Cardinal Nzapalainga.

The Cardinal noted that the bishops at the Synod are trying to discern together how to proclaim the Gospel among young people, and how to hear what young people have to offer to the Church.

“We listen so that we might find together the direction,” he said, adding that “We are still seeking God’s pathways. Sometimes it’s difficult to understand.”

He further noted that young people are looking for the Church to help them find God in their lives, especially when they are facing difficulties.

The cardinal referred to the series of civil wars affecting the Central African Republic for more than a decade, punctuated by brief periods of peace.

Despite the struggles in his country, the Cardinal said that, “Most youth love the Church,” adding that young people in his country want to share their faith with others.

He underlined the need for the clergy to help young people better proclaim the Gospel.

“We need to offer [young people] support so that they convey to others God’s message,” he said.

The Cardinal also warned against “ideological colonization,” referring to the negative influence of some aspects of Western culture, on the Church in the developing world.

The Church, he said, must help young people understand what is true, and what is not, by evaluating it through the lens of the Gospel.