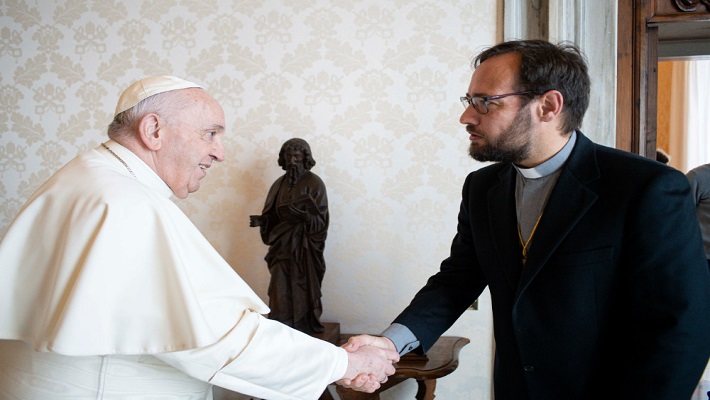 RUMBEK, MARCH 18, 2022 (CISA) – “The Church of Rumbek demands truth and forgiveness. The country, since misery and violence unfortunately continue, demands truth and mercy. Only by welcoming these gifts will there be room for peace,” Bishop Elect Christian Carlassare, MCCJ of Rumbek has said.

As he travels to South Sudan ahead of his episcopal ordination on March 25 and to celebrate Easter, Monsignor Carlassare in a letter addressed to the people of his diocese says “I leave with feelings of renewed trust in God who never abandons us, and in the local Church and Christian community to walk together hand in hand.”

One year after his appointment as bishop and subsequent shooting incidence that delayed his consecration Monsignor Carlassare in a statement said he did not choose his episcopal ordination on the feast of Annunciation but was given to his as a gift.

“I too am called to repeat my yes to the Church and people of South Sudan in a way that is perhaps a little more radical than I have managed to live up to now. I pray that the people of Rumbek may also say their yes to a communal ecclesial journey,” he wrote.

The statement titled “Starting Anew from Forgiveness” anchored on the Pope’s announcement of the Year of Mercy in 2015 described the church in South Sudan as “a fragile and imperfect Church that experiences the compassionate love of God and is called to be a witness of mercy.”

“The South Sudanese Church is a poor Church with only few means, but rich with a lively community of people who are resilient and generous. It is a wounded and suffering Church, but there is no lack of faith and hope in healing. It is a young Church that has a long way to go before it.”

The 44-year-old Comboni Missionary was appointed bishop of Rumbek on March 8, 2021. Shortly after his appointment he was attacked and shot while at his residence resulting to the postponement of his consecration ceremony set form may 23, 2021.