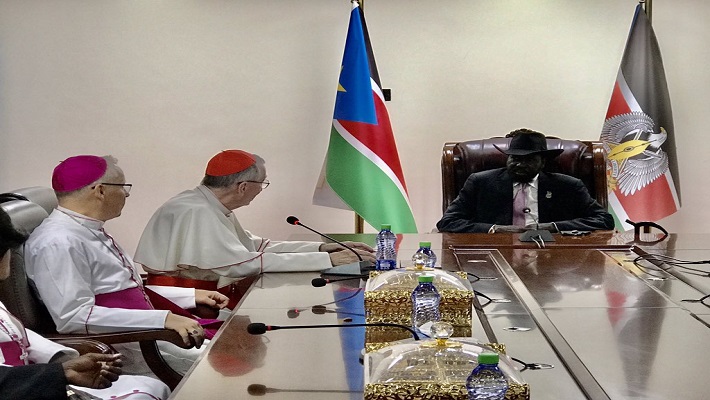 JUBA, JULY 5, 2022 (CISA) – Cardinal Pietro Parolin, Vatican Secretary of State, has arrived in South Sudan for a two-day visit from July 5 to 8, to represent Pope Francis who is unable to make the Apostolic Journey previously scheduled for early July.

“I would like to express my gratitude, my deep gratitude to all of you starting from the representative of the president of the republic, the Church which is represented by Bishops,” said Cardinal Parolin as he expressed his desire to celebrate, pray and meet the people of South Sudan, at a presser held at the airport, a few moments after his arrival.

The Cardinal arrived from DRC where he had met President Felix Tshisekedi and representatives of the UN’s peacekeeping mission in North Kivu and held discussions ranging from the nation’s security and concern about violence in the eastern part of the country, and the need for collaboration between the Church and civil authorities on behalf of the Congolese.

Cardinal Parolin also assured the President Tshisekedi of Pope Francis’ closeness and remarked on the Holy See’s and the Church’s commitment to foster paths of peace and development according to international media outlets.

The Pope in a video message to the people in DRC and South Sudan on July 2, expressed his disappointment with his inability to make the pastoral visit but also alluded to the confidence that he shall be able to meet with the people of those nations as soon as possible.

“I think of the Democratic Republic of Congo and the exploitation, violence and insecurity from which it suffers particularly in the east of the country where armed conflicts continue to cause much intense suffering aggravated by the indifference and the convenience of many,” Pope Francis revealed adding that, “I think of South Sudan and the plea for peace arising from its people who, weary of violence and poverty await concrete results from the process of National Reconciliation.”

The Holy Father also called on the people of South Sudan and DRC to not be robbed of hope confirming that he looks forward to making a reality, an ecumenical visit to both countries together with Archbishop Welby of Canterbury and the moderator of the General Assembly of the Church of Scotland.