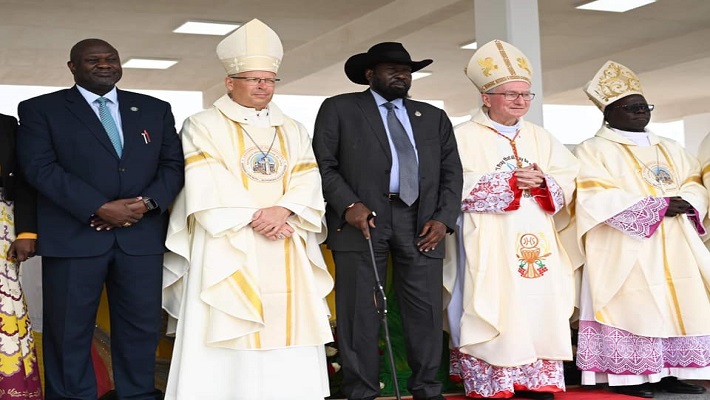 JUBA, JULY 8, 2022 (CISA)- In his address during the Mass held at the Dr John Garang Mausoleum, Juba, and presided by His Eminence Cardinal Pietro Parolin, Vatican Secretary of State on June 7, President Salva Kiir Mayardit reiterated that he will never allow South Sudan to return to war again.

President Kiir asked Cardinal Parolin to inform Pope Francis that the Peace Agreement, Revitalized Agreement on the Resolution on the Conflict in the Republic of South Sudan (R-ARCSS), is being implemented but with difficulties.

“If the Holy Father ask you about the implementation of the Revitalised Peace Agreement, tell him that the people who came to the Vatican years ago in search of peace in their Country, you have found them sitting together and harmonious, “said President Salva Kiir.

The president also observed that it is his desire for peace that he accepted the agreement, which according to him if he was not for peace, then he would not have accepted the peace agreement because there is no country in Africa with five vice presidents.

According to a statement released by the Office of the President of the Republic of South Sudan, the president explained that the crisis in South Sudan is not religious but political. However, other people have turned it into a tribal issue.

President Salva Kiir emphasized that no one in South Sudan has a problem with another because of religious differences because in the country you would easily find a Christian having a Muslim relative and they are co-existing peacefully without any religious differences.

The office of the president communicated that the President wished the Holy Father good health and happiness and said the people of South Sudan are impatiently waiting for his coming while also commending Cardinal Parolin for coming to bring the message of the Pope to calm the people down on why the visit was postponed.

The Revitalized Agreement on the Resolution of the Conflict in the Republic of South Sudan (R-ARCSS), which was signed on September 12, 2018, in Addis Ababa, Ethiopia, by the opposing parties in South Sudan, is widely extolled and commended as a significant development signalling the dawn of peace in the troubled country.