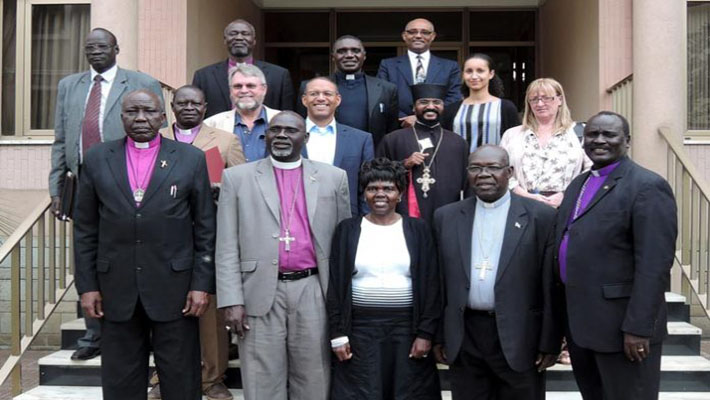 JUBA, JULY 20, 2018 (CISA)-The South Sudan Council of Churches (SSCC) has called on the citizens to shun tribalism and all other divisions that curtail the peace and unity efforts in the country.

The clerics were speaking at a press conference in Nairobi after a meeting to pray and reflect on the development of South Sudan from July 17- 19.

“We are tired of war, violent conflicts of interest and we are urgently calling for all communities of South Sudan to shun tribalism, and all kinds of fragmentations that inhibit from attaining true nationalism, durable unity, and working together for comprehensive peace and genuine reconciliation,” they said.

In the same meeting, they recognized their neighbour countries that were mandated by Inter Governmental Authority on Development (IGAD) to facilitate the recent peace process that led to the signing of a permanent ceasefire agreement known as The Khartoum Agreement in June 2018, and the Entebbe peace proposal on power sharing.

They however warned against untimely emphasis on the technicalities of the agreement, noting that trust has to be built first between the warring parties.

“We thank and commend our good neighbours for these vital initiatives of peacemaking in our country, but we still express strong and serious concerns over untimely emphasis on the technical aspects of the agreement before trust has been built between the parties. The parties themselves have acknowledged that the entire implementation of the agreement will be dependent on how trust can be built both now and in the long term,” said the clerics.

They also advised that the factions involve engage in dialogue for successful implementation of the peace agreement.

“Without genuine dialogue, healing and substantial trust building amongst parties, the political will needed for the successful implementation of a peace agreement will be lacking, and will void all efforts…Peace is not an event, or a document, but a process requiring commitment and sacrifice. Since the war began in 2013, several agreements have been signed but never fully implemented, and as a result, our country remains in despair. The people of South Sudan will no longer accept false promises,” they said.