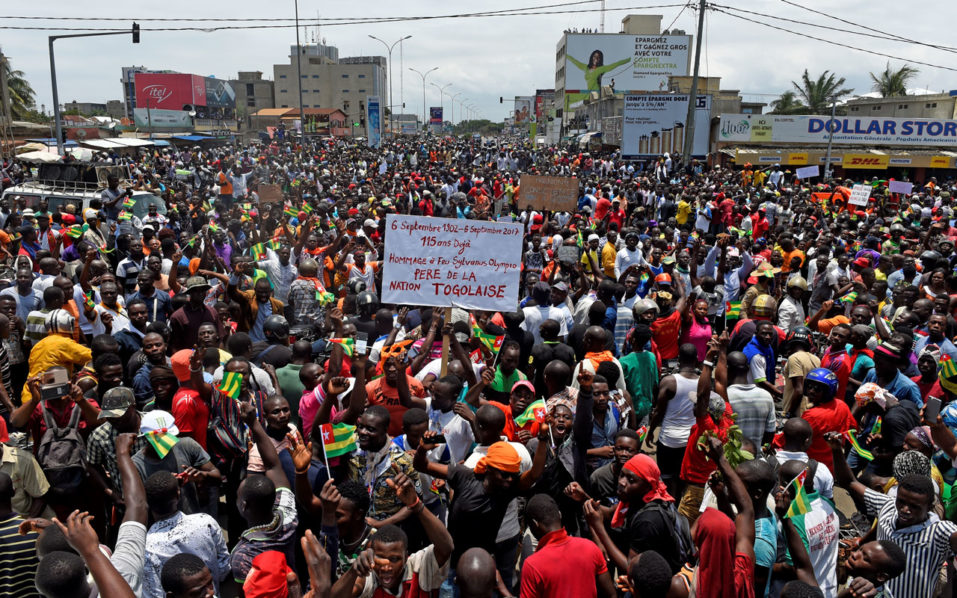 LOME SEPTEMBER 8, 2017(CISA)-Tens of thousands of protesters clad in red, orange and pink– the colours of Togo’s opposition parties – on September 7, marched through the streets of the capital Lome protesting President Faure Gnassingbe win.

“We will march again tomorrow. Faure should talk to us about the conditions for his departure. The (draft) law on mandates comes too late,” said Jean-Pierre Fabre, head of the main ANC opposition party.

He called for immediate resignation of President Faure Gnassingbe, rejecting a government move to introduce term limits as protests gained momentum.
The protests were organised by a coalition of opposition parties and civil society organizations.

A day before the protest, internet connectivity was barred yet unconfirmed images of the protests were posted online showing thousands of people marching in the streets of the capital Lome, northern city of Bafilo, Tchamba in the north among other towns.

According to Togolese activist Farida Nabourema who is tweeting from neighbouring Ghana, some Togolese go to the border where Ghana’s telecommunication networks are accessible to transmit post updates of the protest online.

Togo’s cabinet adopted a draft bill to bring back the term limits; the government announced in a statement, reported Reuters.

President Gnassingbe has ruled the West African nation since his father died in 2005 after 38 years in power.

The late President Gnassingbe Eyadema passed a law in 1992 limiting the president to two terms in power, only to scrap it a decade later.

However, unlike marches in August during which at least two protesters were killed by security forces, there were no cases of reported violence.