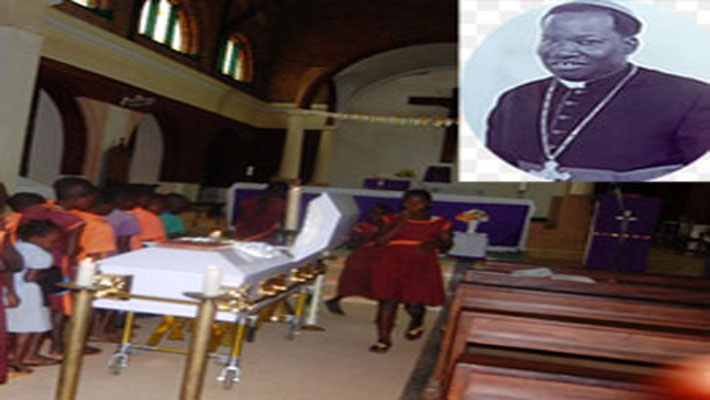 LIRA, JULY 24, 2018 (CISA)-The late Bishop Joseph Oyanga, Emeritus of the Catholic Diocese of Lira will be buried on Thursday, July 26.

Bishop Oyanga, is reported to have died on Sunday July 22, at St. Anthony hospital Tororo after succumbing to congestive cardiac failure, at the age of 82.

According the Uganda Episcopal Conference, a Requiem Mass will be held at Uganda Martyrs Cathedral Parish in Nyangole, Tororo Archdiocese on Tuesday, July 24 before the body leaves in the afternoon for Alanyi Parish, his home parish within the Catholic diocese of Lira.

On Wednesday, 25 July, the body will be taken to Uganda Martyrs Cathedral Parish in Lira Diocese for a Requiem Mass and public viewing. The burial will take place on Thursday, July 26 in Lira Diocese.

He was ordained priest in Tororo Diocese on May 19, 1963 in Alanyi parish by the late Bishop Cypriano Kihangire of Gulu Diocese.

He served in Tororo Diocese until July 14, 1989 when he was elected second bishop of Lira Diocese and was ordained on October 1, 1989.

The late Bishop retired on December 2, 2003 and was succeeded by Bishop Joseph Franzelli, the current prelate of the Catholic Diocese of Lira.

The Vicar General of Lira Diocese, Rev Desiderius Pule Olima described the Late Bishop as “…A peace maker, a parent, a counsellor, who spent most of the time associating with his flock. He was a pillar in the Catholic Church.”

On his part, the Vicar General of Tororo Archdiocese Rev Kevin Musisi described him as a great shepherd and teacher whose death is a big blow to the Catholic Church.