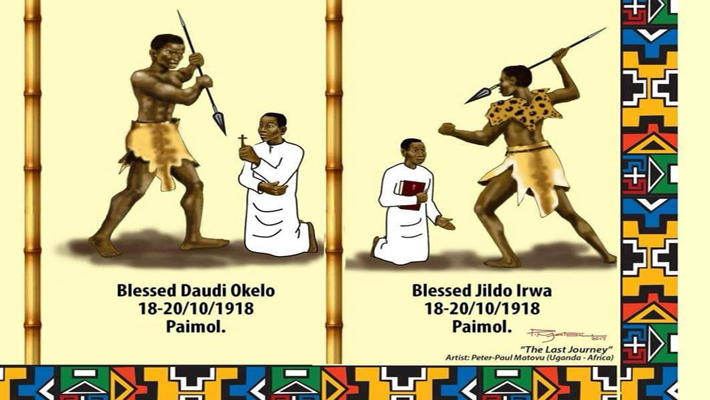 GULU, OCTOBER 19, 2018 (CISA)-The Catholic Church in Uganda is set to mark 100 years of the martyrdom of catechists Daudi Okello, and Jildo Irwa.

Preparations towards the celebrations began on October 18 with the main event scheduled for October 20, at Paimol Catholic shrine in the Catholic Diocese of Gulu.

Daudi and Jildo were killed in 1918 in the East Acholi, the present day Kitgum District for spreading Christianity then assisting Fr Cesare Gambaretto.

According to a statement by the Episcopal Conference of Uganda, Daudi of Payira was as a young man of peaceful and shy character, diligent in his duties as a catechist and loved by all.

After Daudi was killed, “…the mortal remains, collected in February 1926, were later placed in the mission church of Kitgum, at the foot of the altar of the Sacred Heart.”

“Jildo was much younger than Daudi. Of lively and gentle nature, like many Acholi youngsters, he was quite intelligent and occasionally acted as secretary to the vice-chief Ogal who had given hospitality in Paimol,” reads the statement.

He was of great help to Daudi in gathering the children for the instruction with his gentle way. He knew also how to entertain them with innocent village games, and noisy and merry meetings.

On the morning of their martyrdom, Daudi warned Jildo of a possible impending death. Jildo was unshaken from the way he answered Daudi.

He said “Why should we be afraid? We have done nothing wrong to anyone; we are here only because Fr Cesare sent us to teach the word of God. Do not fear!”

Over 10,000 pilgrims are expected to grace the celebrations.